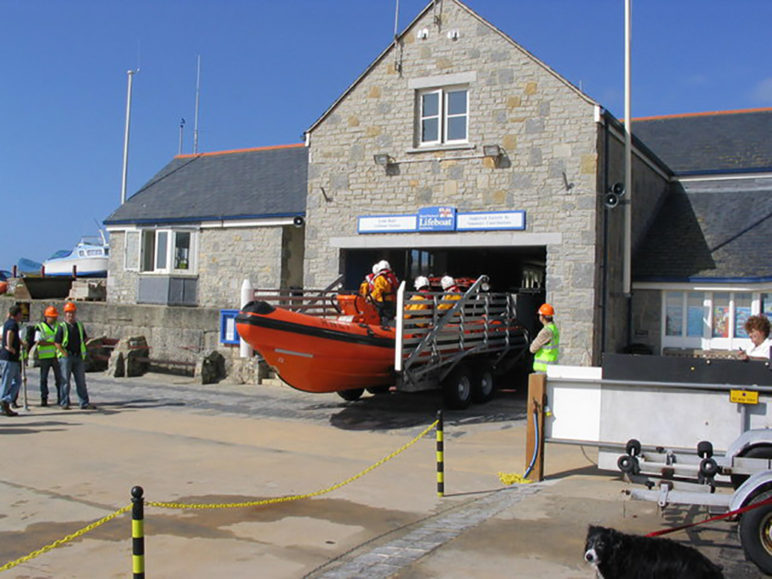 LYME Regis lifeboat was launched on Sunday after a mayday alert when seven rowers were throw into the sea from a capsizing gig.

The incident happened just outside the town’s harbour.

The seven men, members of Lyme Regis Gig Club, were rowing the ten metre gig Black Ven when it was struck by two large waves.

All seven were thrown out of the boat. The cox, Tony Colston, received a head injury, and after first aid from RNLI volunteers at the lifeboat station he was taken to hospital for checks.

The other six were cold, wet and shaken but otherwise unhurt.

The rowers all reached shore safely. Two members of the lifeboat crew jumped into the water to help the rowers ashore.

One of the gig’s crew, Nick Bale, said: “We were at 90 degrees to the waves when we were hit from behind.”

Another rower, Chris Bailey said: “We were hit by freak waves, and it could have happened to anybody.”

The RNLI volunteers launched lifeboat Spirit of Loch Fyne within seven minutes at 10.59am and returned to harbour at 11.30am.

The gig club released the following statement following the incident: “Lyme Regis Gig Club would like to thank everyone who responded to Sunday morning’s incident.

“With particular thanks to the group of surfers and boarders who were first on scene and assisted in getting several of the rowers to shore. We don’t know your names, but we would like to offer our sincere thanks.

“Similarly to the coastguard team and lifeboat crew who arrived when all persons were safely out of the water, and assisted with first aid and providing much appreciated hot showers, hot drinks, chocolate at the lifeboat station.

“You know you live in a tight knit local community when so many people burst into action to help out at a moments notice, bringing support, reassurance and even hot coffee (thank you, Kiosk).

“With all persons safe and accounted for the gig was successfully recovered without damage.”

THE term domestic abuse may still carry with it connotations of violence behind closed doors between a husband and wife. […]

RECORDED crime in the Dorset Police area has remained stable while it has increased in many parts other of the country, new figures reveal. […]