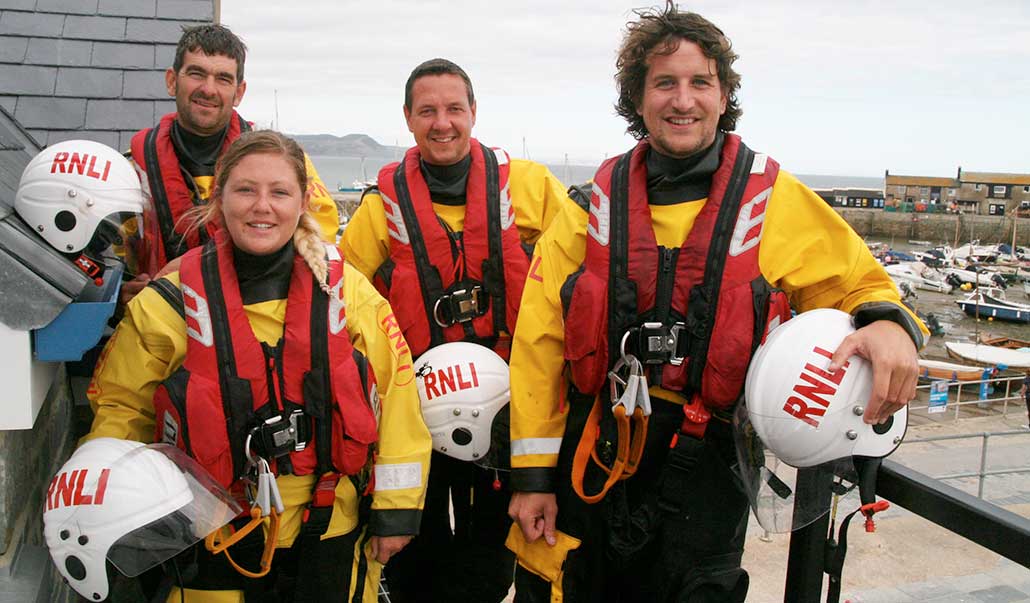 LYME Regis lifeboat crew’s dramatic rescue of two teenage boys who were being swept out to sea will feature on the BBC series ‘Saving Lives at Sea’ this month.

The rescue, at the end of June 2019, was filmed by a lifeboat crew member using a helmet camera and shows how two 14 year old boys were found clinging to each other after being swept out to sea some 200 metres from the River Axe, in Seaton.

The boys, Archie Woollacott and Bozhidra Bobev, known as Bo, were both students at Axe Valley Academy in Axminster.

Archie later helped to raise £700 which the school presented to the RNLI after he had his hair shaved off by a fellow student.

Archie, his mum Emily and Bo will feature in the episode, along with lifeboat crew members Tim Edwards, Murray Saunders, Andy Butterfield and Nikky Williams (pictured above).

Having initially been scheduled for screening at the end of 2019, the episode was postponed by a new date for its broadcast has now been announced.

It will be screened on BBC 2 at 8pm on Wednesday, February 26.

The series gives a unique insight into the lives and work of the charity’s lifesavers who are needed more than ever before, rescuing thousands of people and saving hundreds of lives around our coastline and on inland waterways every year.

In 2018 alone, RNLI lifeboat crews around the UK and Ireland rescued 9,412 people, saving 211 lives, while the charity’s lifeguards aided 32,207 people and saved 118 lives on some of the UK’s busiest beaches.

About Francesca Evans 2461 Articles
Francesca grew up in Lyme Regis and has worked in community journalism in the area since 2011, having gained a First Class Honours degree in journalism and her NCTJ qualifications at Southampton Solent University.
Instagram Twitter

Lifeboat crew called out during training

LYME Regis lifeboat crew was called out during its training session on Sunday morning, following reports that a six-metre fishing vessel had broken down.  […]

BRINGING together the best produce in Dorset and top UK chefs, the popular Food Rocks festival will return to Lyme Regis for its sixth year this September.  […]

THE importance of effective signage in solving Lyme’s serious traffic chaos was expressed by members of the town council’s Town Management Committee. […]