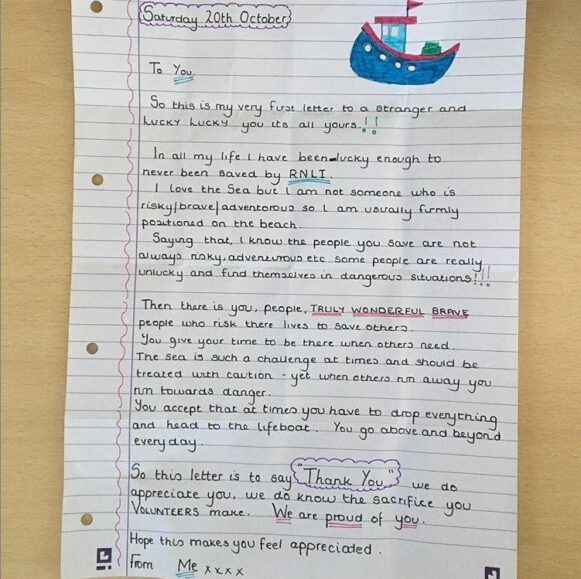 THE RNLI has said it is “lucky to have such wonderful supporters” after Lyme Regis lifeboat crew were sent an anonymous letter, praising their dedication and bravery.

The lifeboat station received the anonymous letter this week, which described the crew as “truly, wonderful brave people who risk their lives to save others”.

It added: “You give your time to be there when others need. The sea is such a challenge at times and should be treated with caution – yet when others run away you run towards danger.

“You accept that at times you have to drop everything and head to the lifeboat. You go above and beyond everyday.”

The letter was simply signed ‘From Me’.

Nick Marks, lifeboat operations manager, said: “The volunteer crew in Lyme Regis were touched that someone had taken the time to write the letter and the kind thoughts are very much appreciated by all.

“It is great to for the crew and that there’s a fan of the RNLI charity that is saving lives at sea.

“The station receives about a dozen letters a year thanking the volunteers and crew for the work that they do.”

A photo of the letter was posted on the national RNLI’s Twitter account, with the comment: “A lovely thank you letter was recently sent to the crew @LymeRegisRNLI. Receiving lovely words like this mean a great deal to us – we are so lucky to have such amazing supporters.”

It has also been picked up by regional and national news agencies.

AN altercation, described by an eyewitness as “truly horrifying”, broke out in Broad Street, Lyme Regis, yesterday afternoon.  […]

Police step up patrols as they prepare for ‘surge of visitors’

DORSET Police is preparing for a surge of visitors this weekend as lockdown restrictions ease and the hospitality industry reopens. […]