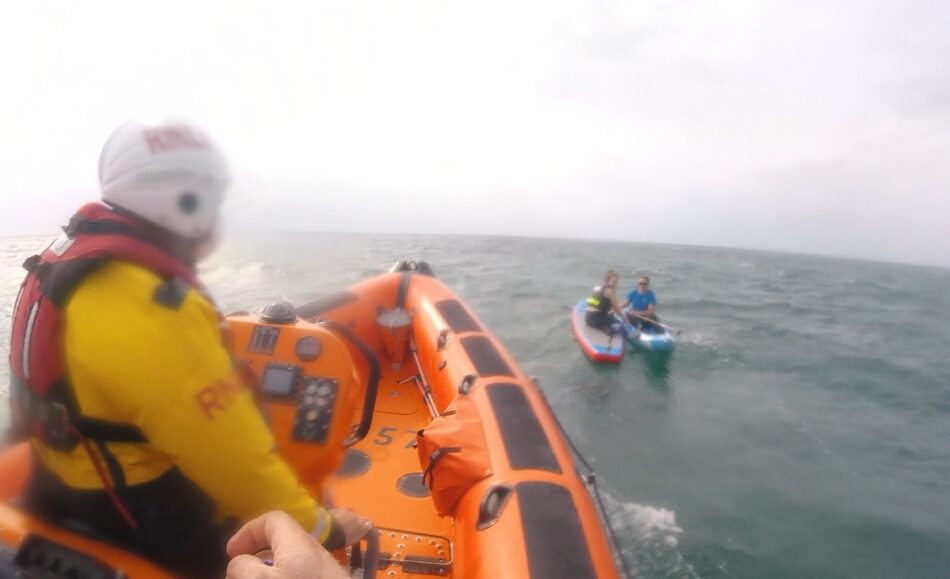 TWO women on a kayak and paddleboard were rescued on Saturday afternoon by volunteers from Lyme Regis lifeboat crew.

The lifeboat crew were contacted by the coastguard to a report of two women who were drifting away from the shore at Lyme Regis.

The crew launched just after midday and were guided in the direction of the women by the Lyme Regis harbourmaster’s team.

The two women, aged 30 and 31, from Winchester and London, one of whom was pregnant, had intended on enjoying a leisurely time at sea however the winds from the north east were stronger than expected and the two of them were blown offshore.

They realised very quickly that they were in trouble and they called family ashore who notified the coastguard.

The lifeboat crew were alongside the two women six minutes after launching, both on their kayak and paddleboard, they were wet and cold but otherwise safe.

The wind had blown the two women approximately one mile south of Lyme Regis.

The crew took the women aboard the lifeboat and returned to Lyme Regis lifeboat station where they were met by coastguards and given safety advice.

Jon Broome, helm of the lifeboat said: “This weekend is host to some high spring tides and strong north easterly winds, it is very important that anyone going to sea have the appropriate equipment to contact the coastguard if necessary.

“These two women were incredibly lucky today, but because one of them had a mobile phone so they were able to call for help.”

This was the 37th time that Lyme Regis lifeboat has launched this year.

It is advisable that anyone near or on the sea this weekend check the weather and tides before heading out. If you see anyone in trouble in or on the sea, call 999 and ask for the coastguard.

THE Lyme Regis branch of the Royal British Legion is celebrating a record collection for the Poppy Appeal. […]

Lyme Regis represented at The Great Pilgrimage in Belgium

TWO members of the Royal British Legion Lyme Regis branch are currently visiting Ypres in Belgium to take part in commemorations for the 100th anniversary of the end of the First World War. […]

POLICE have warned of a telephone scam after a Lyme Regis businesswoman was targeted on Thursday.  […]