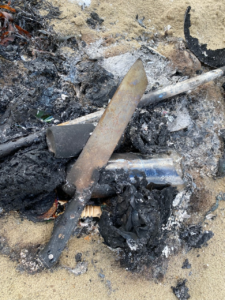 A LARGE knife and other dangerous items had to be removed from Lyme Regis sandy beach last weekend.

Lyme Regis resident Debbie Conibere discovered the items on one of her daily dog walks on the beach.

She was filming a live video at the time for her Facebook page Lyme Regis Loving Dog Owners, Visitors & Friends.

On the video she was showing the kind of litter that some dog owners regularly pick up on their walks, with what looks like burnt debris from a barbecue left on the beach.

But while taking a closer look during filming, Debbie was shocked to find the discarded large knife, amongst broken glass and a canister.

She removed the dangerous items and reported the incident to the police and Lyme Regis Town Council.

Debbie and fellow dog owners regularly pick up items of litter such as wrappers, soiled nappies, baby wipes, cigarette butts, cans and nitrous gas canisters on dog walks as part of a ‘Paws on Plastic’ initiative, which has more than 17,000 dog owners pledging to pick up litter.

Long awaited face-lift for the Cobb

NEWS that West Dorset District Council has agreed to contribute £1 million towards the cost of much-needed improvements and protection of Lyme’s most famous landmark, the Cobb, will be welcomed by all in the town. […]

Lifeguards to start patrols in Lyme Regis next month

LIFEGUARDS will be back patrolling Lyme Regis beach from July 4. […]