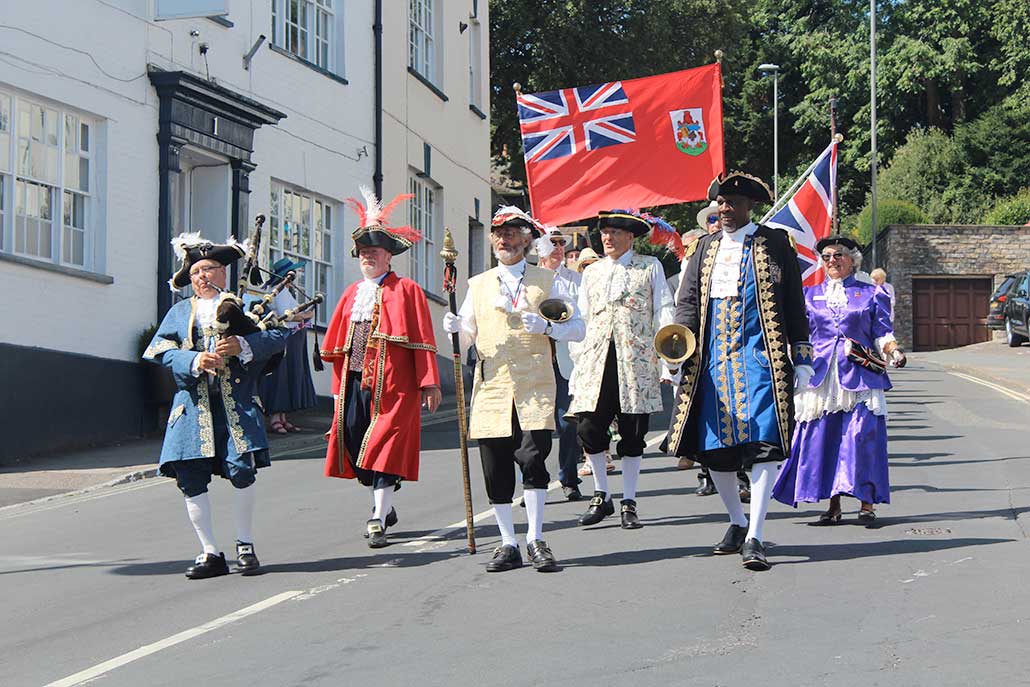 The parade commemorates Admiral Sir George Somers, a former Mayor of Lyme Regis and MP, who founded the islands of Bermuda in the name of King James VI in 1609, after being shipwrecked en route to help the beleaguered settlers of new English colony, Jamestown, in Virgina.

Somers drove his ship Sea Venture onto the reefs surrounding the islands and managed to get all 150 crew and passengers safely to shore. The wreckage is believed to have been the inspiration for Shakespeare’s play ‘The Tempest’.

They remained on the islands for 10 months, exploring, collecting supplies and building two new ships – the Deliverance and Patience – from the wreckage and Bermuda’s plentiful cedar wood, eventually continuing their journey on to Jamestown.

When they arrived they found the settlement almost completely wiped out from starvation and disease.

Somers returned to Bermuda to collect more supplies but he died on the islands in 1610. His heart is believed to have been buried in what is now the historic town of St George’s, and his body was returned to the Cobb in Lyme Regis for burial in Whitchurch Canonicorum, near Charmouth, where Somers had lived at Berne Manor.

Lyme Regis was officially twinned with St George’s in Bermuda in 1996 and tripled with the archeological site of Jamestown in 2015, creating the Historic Atlantic Triangle.

But the Somers Day parade has been held annually for almost 40 years, first instigated by former Lyme Regis town crier, the late Richard Fox MBE, and his counterpart from St George’s, Bob Burns, who met while competing in international competitions and founded the links between the two towns.

They took part in the procession along with Lyme’s civic party, including mayor Brian Larcombe MBE, members of the Lyme Regis/St George’s Twinning Association and visiting town criers from the local area.

The parade was led down Broad Street, along Marine Parade and out to the end of the Cobb for a flag-raising ceremony and speeches by both mayors, outlining the importance of the friendship between the two towns.

A special cry by Lyme’s town crier Alan Vian was also held that morning next to the statue of Sir George Somers in Lister Gardens.

Following the procession, guests enjoyed lunch at the Royal Lion Hotel followed by a service at the St Candida and Holy Cross Church in Whitchurch Canonicorum, led by the Reverend John Eade.

Mr Frith, who is also the honorary town crier of Whitchurch Canonicorum, then gave a cry at the war memorial outside the church, followed by afternoon tea.

During their visit, guests from Bermuda were also able to take part in a programme of social and civic events, including a meeting between the mayors of Lyme and St George’s to discuss similar challenges faced by these two popular tourist resorts.

The visiting party enjoyed meals at the Tuckers Arms in Dalwood, the Pilot Boat and Pop Up Kitchen in Lyme Regis, as well as trips to Abbotsbury Subtropical Gardens and Colyton, which also shares important historical links with Bermuda.

Sir Thomas Gates, born in the parish of Colyton, was also aboard the Sea Venture and became Governor of Jamestown when they eventually arrived at the new settlement. Guests enjoyed learning more about the town with an historical tour and a visit to Mike Rowland & Sons Wheelwrights.