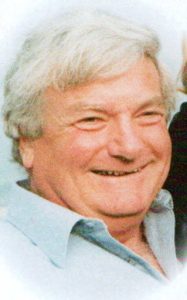 ST ANDREW’S parish church in Charmouth was full to capacity for a service of celebration for the life of Ray Kemp, one of the village’s most popular characters who died aged 78 after a long illness.

The service was conducted by the Reverend Rosemary Bragg and there were readings by granddaughter Megan Glover and friend Mallory Hayter, and tributes from his two daughters, Sarah and Mandy. He also had a grandson Jonny.

Ray was a keen sportsman, playing golf and cricket and was a professional footballer, turning out for Tonbridge, Gillingham and Fulham.

Ray and his wife Treena were married for 55 years and moved to Charmouth from Kent, throwing themselves into village life, Ray being a keen member of one of The George skittle teams.

Proceeds from a collection at the service were donated to the Royal National Lifeboat Institution.

Philip Evans writes: “Ray worked for me as an advertising rep at View From Newspapers and, despite being older than the young sales team around him, he was tremendously popular with a sharp wit and a great sense of fun.

“At company social events he would often regale us with tales of his days as a professional footballer. He was one of life’s gentleman, always looking on the brightside of life, and was much admired by all who knew him.”

About Philip Evans 796 Articles
Veteran journalist and newspaper manager Philip Evans has worked in the publishing industry for more than half a century. He started out as a reporter for Pulman’s Weekly News as a young man and went on to work for an international publishing company in the UK, South Africa and Australia before returning to Lyme Regis where he is still reporting on local events as he has done for more than 53 years.
Twitter

Tributes pour in for the late Reverend Keith Vivian

THE word “legend” is one of the most overused in the English language. Its dictionary meaning is someone who is “very famous and admired, usually because of an ability in a particular area”. […]

LYME Regis is mourning seven respected citizens who lived in or had strong associations with the town. […]

Town mourns local fundraiser who changed lives through her charity

LOCAL fundraiser Josephine Enright has died at the age of 72 following a long respiratory illness. […]