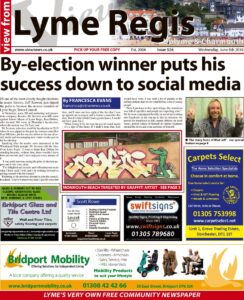 FORMER staff of the Lyme Regis-based View From Newspapers have won a near three-year fight for the money they were owed when the company closed in 2018.

Staff will receive notice pay settlements and additional payments awarded by an employment tribunal after Duncan Williams, the final owner of the group, was declared bankrupt.

The money will be paid by the Insolvency Service after Plymouth County Court ruled against Mr Williams, meaning the government will now step in to pay at least a proportion of what the former staff are owed.

The View From Newspapers was originally set up in the early 2000s by Lyme Regis journalist Philip Evans MBE, now managing director of Lyme Regis Media Ltd, which publishes LymeOnline.

At its height, the company published free weekly newspapers in 14 towns across West Dorset, East Devon and South Somerset, including the popular View From Lyme Regis title.

The business went through several ownership buy-outs in its later years, eventually being bought by Peter Masters, proprietor of the Cornwall-based Sunday Independent, before its shock closure in January 2018, with 26 staff being made redundant.

The company was then sold 12 days later for just £1 to Mr Williams, who was found liable for claims of staff awaiting pay in lieu of notice, redundancy money and arrears of pay. Mr Williams unsuccessfully appealed against the decision.

At the end of 2019, the Insolvency Service made payments to those ex-employees who were due redundancy payments, following an employment tribunal judgment.

However, some staff had remained completely out of pocket until now, despite contributing hundreds of pounds in legal fees, because they had not been with the company for at least two years at the time of their dismissal.

With Mr Williams now being declared bankrupt, the former staff will receive the notice pay settlements and additional payments from the Insolvency Service.

Philip Evans, his wife Jackie and daughter Francesca – who also both worked for View From Newspapers at the time of closure and now work for Lyme Regis Media Ltd. – were not involved in the employment tribunal.

Former deputy editor James Coles, who led both the staff’s tribunal claim and the bankruptcy petition against Mr Williams, said: “The amount of work to get to this stage, and receive what we’ve been entitled to for so long, was staggering.

“It’s a warning to anyone who believes, as an employee, they are genuinely protected by law in this country, just how easy it is for their employer to break these supposed rules.

“Mr Williams purchased the View From for the obligatory £1 in a deal which was obviously ‘too good to be true’, as it meant he took on the company’s debts, shortly after we had lost our jobs with barely a minute’s notice.

“Masters was in charge when the plug was pulled on the company and jobs lost without notice or consultation.

“The responsibility passed to Williams when he handed over his one pound to take control of a business that was already as good as dead and buried.

“It was a sorry end to what was originally a great, family-run business, but at least my former colleagues and I can finally look forward to our severance pay, hopefully in time for Christmas. A rare positive for 2020.”

He denies ever having lived at the address in Launceston, Cornwall, given in his bankruptcy order.

Speaking to industry website Hold The Front Page, Mr Williams said: “It was never my intention to deny any journalist their pay, I simply objected to the court’s decision to make me personally liable for these debts when these should have been shouldered by a limited liability company formation.

“I wish everyone well with their future careers, whether this be in print or digital journalism. We are living through a period of time where accurate and trusted news reporting has never been more important.”

LYME Regis and the surrounding area now has its own community radio station, with the launch of Lyme Bay Radio.  […]

Journalist Kate Adie to give talk at Charmouth church

An exciting time for local media

HAVING celebrated LymeOnline’s second anniversary at the end of February, we’re heading into our third year with a reinvigorated enthusiasm for delivering local news you can trust. […]