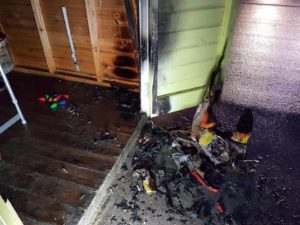 LYME Regis and Charmouth fire crews didn’t have to wait long for their first emergency call-out of 2020.

Both crews were called to the Marine Parade in Lyme Regis at 7.38am on New Year’s Day to reports of a beach hut on fire.

The fire had been caused by fireworks left inside one of the huts, which is believed to have self ignited from a ‘still warm’ fire pit also left inside.

Further along Marine Parade, crews also dealt with an unattended drum fire still burning from earlier in the night.

Crews used one hose reel jet to extinguish both fires.

‘Now is not the time to get complacent’, says Dorset Police

DORSET Police has issued a message to residents as the the government extended the current lockdown, saying now is not the time to get complacent with social distancing measures.  […]

Elderly woman airlifted to hospital after falling on rocks

AN elderly woman was airlifted to hospital after falling on rocks while fossil hunting in Lyme Regis.  […]

BEACH-goers are urged to stay away from the cliffs at West Bay after a woman was hit on the head by falling debris. […]