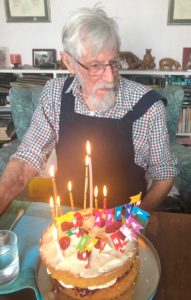 THE family of a man who sadly died following a collision in Charmouth has issued a tribute.

Dorset Police was called at 7.11pm on Thursday, January 23 to reports of a collision involving a pedestrian and a car at the junction of The Street and Lower Sea Lane. It was reported that the driver of the car failed to stop at the scene.

Sadly the pedestrian – a 90-year-old local man who has now been named by his family as Peter Bide – died at the scene.

A local man aged in his 40s was arrested on suspicion of causing death by careless driving, failing to stop at the scene of an accident and failing to report an accident. He has been released under investigation while enquiries continue.

Peter’s family said in a statement: “Peter was a much-loved dad, grandad and great grandad and we will all greatly miss his reassuring and loving presence. He was happily married to Katharine for 54 years until her death in 2006, and they had three children, eight grandchildren and six great grandchildren.

“Born in London, his sense of adventure led him to teach in Yorkshire and Canada before settling in Charmouth 60 years ago. Having survived the blitz as a child, he joined the scouts and developed a lifelong interest in camping and all things outdoors, which he shared with his family.

“Peter had a wry sense of humour which never deserted him and he would make light of the indignities and frailty of old age. He was unswervingly optimistic and never complained about setbacks he encountered. Adept at finding contentment in daily life, he took great pleasure in reading and various creative hobbies, even taking to the stage in his younger years.”

Officers from the traffic unit are continuing to investigate the circumstances of the collision and are appealing for any vehicles or pedestrians who were in the area and witnessed the incident to contact them. They are also keen to hear from anyone who may have captured the collision on dashcam.

Anyone with information is asked to contact Dorset Police at www.dorset.police.uk, via email at scit@dorset.pnn.police.uk or by calling 101, quoting incident number 23:346. Alternatively, contact Crimestoppers anonymously on 0800 555 111 or via www.crimestoppers-uk.org.

‘Now is not the time to get complacent’, says Dorset Police

DORSET Police has issued a message to residents as the the government extended the current lockdown, saying now is not the time to get complacent with social distancing measures.  […]

DORSET Police has announced the launch of Operation Snap, a secure online portal through which members of the public can upload dashcam or otherwise filmed video and digital photographs of road traffic incidents they have witnessed. […]