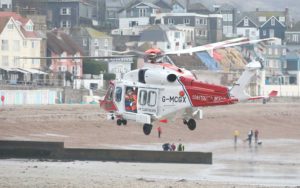 Lyme Regis, West Bay and Beer coastguards, as well as Lyme Regis and Exmouth lifeboat crews and Coastguard Rescue Helicopter 187 from St Athan, Wales, were all called to the scene at about 10pm on Thursday, August 29.

The flares were reportedly seen by a fishing boat but, with no further information, coastguards from West Bay and Lyme Regis split into small teams and took up positions at various vantage points in-between Eype and Lyme Regis to keep watch for further sightings or signs of distress.

Lyme Regis lifeboat started searching off-shore whilst the helicopter was en-route to the area.

An update from Solent Coastguard indicated that a further sighting had taken place, this time further west along the coast.

As a result, the West Bay coastguards were stood down and the team from Beer and Exmouth lifeboat crew were tasked to join the search.

Searching continued from the land, sea and air until just after midnight when the search was stood down with no signs of anyone being in distress and no vessels reporting as being in difficulty or overdue.

EMERGENCY services spent the night looking for a missing man believed to be in the West Bay area. […]

LYME Regis lifeboat crew have taken over the Town Mill’s Courtyard Gallery with a pop-up shop and exhibition. […]

DORSET Police is joining forces with partner agencies in the county to ask the public to act responsibly and ‘think twice’ before travelling to Dorset. […]