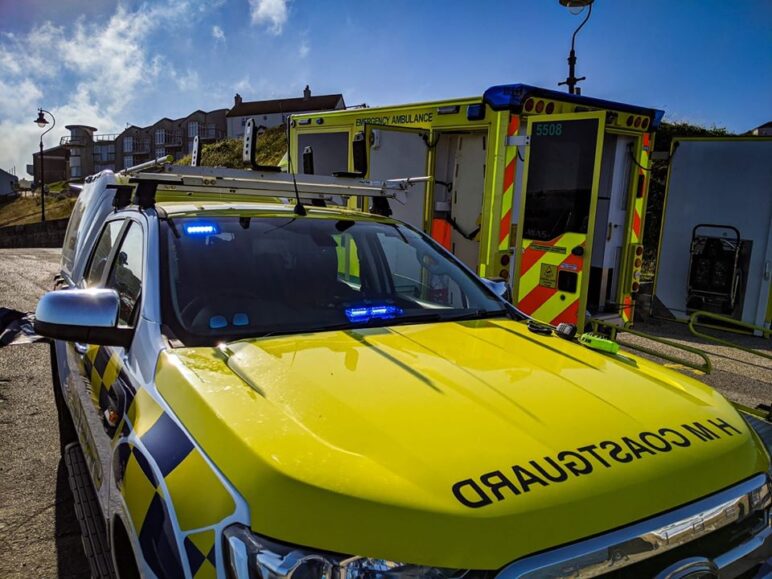 EMERGENCY services were called to help a child trapped in mud on the cliffs at Charmouth yesterday (Saturday) afternoon.

Coastguards from Lyme Regis and West Bay, fire brigades from Charmouth, Lyme Regis, Axminster and Poole were called to the scene at 2.56pm. Lyme Regis lifeboat crew were also paged but stood down before launching.

On arrival at Charmouth, two coastguards walked to the casualty’s location to assess the situation while the rest of the team carried the mud rescue equipment to the scene.

The casualty was located approximately 30 metres up the cliff with one leg stuck in mud up to his knee.

Whilst awaiting the arrival of all the rescue equipment, the coastguards and fire service put a ladder across the mud. This allowed the casualty to sit on to the ladder and feel more secure.

They were then able to lift his stuck leg up further and by removing some soft material and was quickly freed.

The casualty was carefully carried down from the cliff and placed in stretcher and taken back to Charmouth to an awaiting ambulance. They were mildly hypothermic and taken to Dorset Count Hospital to be fully assessed.

A spokesperson for Lyme Regis Coastguards said: “Please do not be tempted to climb the cliffs. Even after the warm spell there are still areas which are very dangerous with soft mud as well as the risk of falling debris.

“Thanks to the first informant who used the What3Words smartphone app to report the exact location of the incident. This allowed the rescue teams to get to the correct location extremely quickly.

“If you do become stuck call 999 and ask for the coastguard.”

Lifeboat crew rescue man being swept out to sea

LYME Regis lifeboat was launched on Friday afternoon to a report of a man in the water in difficulty at Seaton, Devon. […]

A MAN arrested in connection with a fatal crash in Charmouth will face no further police action. […]

Lyme Regis promised police officers will be stationed in town

POLICE officers will be stationed in Lyme Regis once again, according to West Dorset’s Neighbourhood Inspector Darren Stanton.  […]