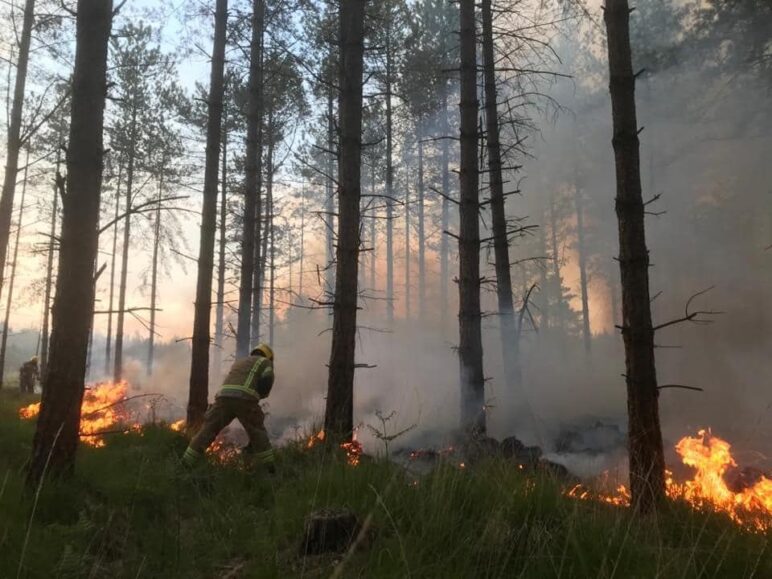 OVER the past week, local fire crews have been among those tackling a wildfire at Wareham Forest – described as one of the most devastating forest and heath fires in Dorset in living memory.

The fire was sparked on Monday, May 18 and crews continued to tackle the blaze for over a week, as it destroyed 220 hectares of forest – the size of more than 230 football pitches.

Dry and windy conditions made it difficult to keep the blaze under control, and it was declared a major incident on two separate occasions as hotspots continued to flare up.

The cause of the fire is now believed to have been accidental, after multiple disposable barbecues, campfires and glass bottles were found in the area.

Lyme Regis fire crew were called to the scene at least four times and Charmouth’s crew seven times. Other local crews involved in the incident have included Bridport, Axminster and Seaton.

As well as those from Dorset & Wiltshire Fire and Rescue Service, firefighters from Avon, Devon & Somerset, Hampshire, Royal Berkshire, South Wales and West Sussex, and specialist advisors from Forestry England, Dorset Police colleagues and many volunteers have been working tirelessly together to try to bring this major incident to conclusion.

Dorset & Wiltshire chief fire officer, Ben Ansell said: “I am extremely proud of the hard work of firefighters and all staff from across Dorset & Wiltshire that have attended this incident, as well as the control room staff who have worked tirelessly to make sure resources are where they need to be.

“All 50 fire stations from across the service have attended the incident at some point this week. We are extremely grateful to the National Fire Chiefs Council and all the other fire and rescue services and other agencies that have supported us in dealing with this incident.

“This incident highlights how devastating and resource intensive heath and forest fires are. This has been made even more difficult by the weather conditions we have faced this week and the current social distancing guidelines in place – which are almost impossible to adhere to when dealing with a forest fire.”

Kite surfer injured after dragged along beach in heavy winds

EMERGENCY services were called to Lyme Regis beach on Friday afternoon when a kite surfer’s sail was caught on the roofs of seafront cottages. […]

COMMUNITIES across Dorset are being asked to keep up the good work in stopping the spread of COVID-19.  […]

DONATIONS to the RNLI come in all shapes and sizes and for all sorts of reasons. And every one is greatly appreciated by the charity that saves lives at sea. […]