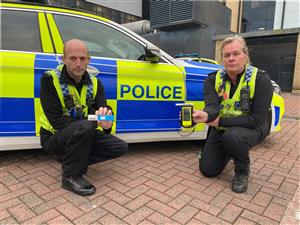 Officers want to raise awareness of the inherent dangers involved in drink and drug driving by encouraging people to take responsibility for their actions this Christmas.

Throughout the month-long operation, officers will be requesting roadside breath tests from all drivers who commit a moving road traffic offence, irrespective of whether or not they suspect a drink driving offence.

Drugwipe sample kits will be used on drivers suspected of being unfit to drive through drugs, which provide an instant roadside indication before the driver is taken to custody to provide a blood sample for further analysis.

Officers will also be carrying out intelligence-led fixed site checks, as well as engaging with motorists on the risks of getting behind the wheel after a drink or taking drugs.

Inspector Joe Pardey, of the Dorset Roads Policing Team, said: “We know 2020 has been a different year for us and we’re unlikely to be out socially in the same ways as before this Christmas, but I want to be clear that the pandemic will not stop us from rigorously targeting those who are a danger on our roads, day or night.

“Despite long-term reductions, drink and drug driving still accounts for 15 per cent of road deaths and almost 10,000 casualties nationally each year. We want to work with the public to not place additional unnecessary pressures on our NHS.

“Alcohol and drugs impair many of the functions necessary for safe driving; reaction times and spatial awareness are affected significantly. This may still be the case the morning after, depending on how much alcohol is consumed the night before and when you stopped drinking.

“If police think you are unfit to drive through consumption of alcohol, even if your breath test registers lower than the prescribed limit of 35 micrograms of alcohol per 100 milliliters of breath you can still be arrested and may be charged with an offence. In short, you do not have to be drunk to be a drink driver. Don’t risk it.

“It’s not just you that’s at risk. You could kill or seriously injure another person. Drink and drug driving destroys people’s lives and those of their families. Avoiding this happening is as simple as planning ahead, leaving the car at home, and using a taxi, public transport or designated driver to get home.”

Police Constable Heidi Moxam, of the Alliance Roads Policing team, added: “Over my 25 years’ service with the roads policing team, I have witnessed horrific devastation to families and their loved ones involved in collisions caused by drink and drug drivers.

“Having to break the news to loved ones that a family member is never coming home is one of the worst parts of my role, but sadly it happens all too often.

“Over the past decade we’ve significantly reduced the number of people killed and seriously injured on our roads and we are passionate about ensuring we continue this downward trend.

“I would encourage you to be the responsible driver and not to take the risk where drink or drugs are concerned.

“If you have information about anyone who has been drinking or taken drugs and is about to drive, I would urge you to call us on 999 with the make and model of the vehicle, registration number and direction of travel.”

Dorset Police and Crime Commissioner Martyn Underhill commented: “This will be a Christmas period unlike any we’ve ever known, but although parties and nights out may not be taking place in the same way this year, the usual rules around drink or drug driving still apply.

“Bear in mind that this year, in which there are likely to be fewer vehicles on the road, there is a far greater chance of any motorist who are over the limit being caught.

“In the current climate nobody wants to go into the new year with the prospect of gaining a criminal record, and possibly losing their job, hanging over them. I urge everyone not to take the chance before getting behind the wheel, even if they’ve been drinking the night before.”

DORSET Police is launching a campaign to raise awareness around domestic abuse and the emotional and psychological impact of controlling and coercive behaviour.  […]

LYME Regis, Charmouth and Axminster fire crews are among those which have been called back to Wareham, as emergency services tackle a forest fire for the sixth day running.  […]

EMERGENCY services and partner agencies across Dorset have launched the campaign #Unacceptable to tackle the amount of verbal abuse, assaults or attacks their staff face and the rising number involving threats of COVID-19 infection. […]