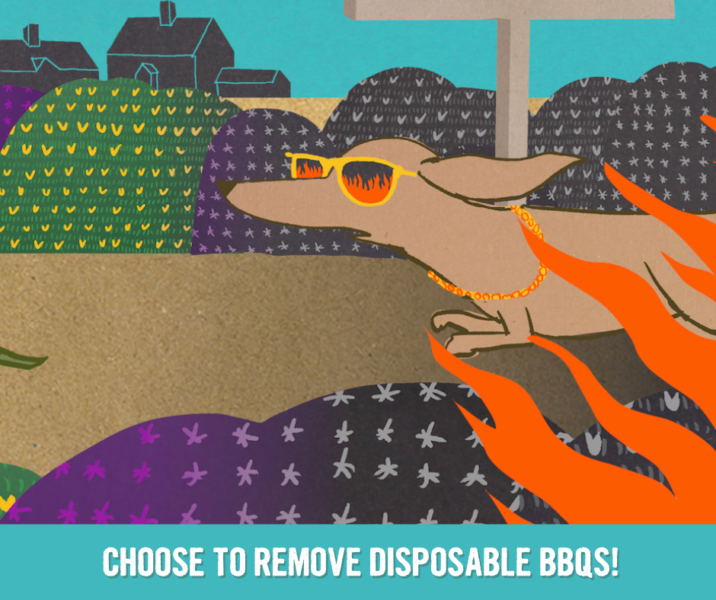 FOLLOWING its campaign last year raising awareness of the environmental risks posed by use of disposable barbecues, Litter Free Dorset is going one step further this summer and calling for shops to stop selling the items.

More than one million disposable barbecues were sold in the UK last year and, in May 2021, it only took a couple of these to burn down an area the size of over 200 football pitches in Wareham Forest in Dorset.

Disposable barbecues are often disposed of inappropriately, sometimes without being put out properly, which frequently results in wildfire, with devastating environmental impacts.

In Dorset, we average 400 outdoor grass related fires on heathlands and forests every year, including two major incidents this weekend in St Leonards & St Ives and Verwood.

Fires on heathland destroys wildlife, are a risk to the surrounding community and contribute to climate change.

A joint campaign with other local authorities, organisations and landowners is being developed to communicate to visitors and residents where they are not allowed to have barbecues and campfires this summer.

Litter Free Dorset is working with a large number of local communities and businesses to ensure the success of this campaign. They have already had conversations with local shops as well as large supermarket chains such as Tesco, Co-operative, Waitrose and Sainsbury’s.

Sophie Colley from Litter Free Dorset said: “A huge Thank you goes to the businesses that have already taken it upon themselves to stop selling disposable barbecues altogether.

“If you are still selling disposable barbecues please reconsider removing them and displaying safety messaging next to any other barbecue related items.”

If you are a business that is choosing to not sell disposable barbecues this year, email litterfreedorset@gmail.com to let them know and download a poster from www.litterfreedorset.co.uk to display in your shop.

Your business will be added to a growing list of local businesses choosing to remove disposable BBQs from sale in Dorset.

If you are selling other barbecue related items such as charcoal, Litter Free Dorset also has posters and flyers with safety advice for customers.

If you are a member of the Dorset community and have spotted a shop selling disposable barbecues, you can find handy resources, including a template letter to businesses, a Wareham Forest Fire infographic and poster to share with your local shops to encourage them to #ChooseToRemoveDisposableBBQs.

For more information and to follow the campaign’s progress, visit www.litterfreedorset.co.uk

HEATING rural homes in Dorset with used cooking oil may be the most effective way of reducing their carbon emissions, according to industry experts. […]

DORSET Council has launched a consultation, asking people to let them know what they think about its plans to tackle the climate and ecological emergency. […]