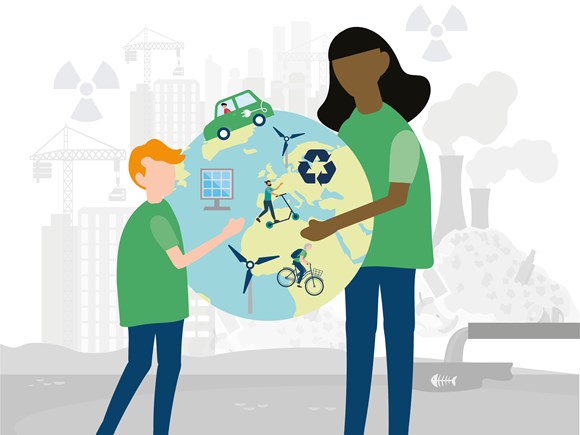 A RECENTLY published progress report has revealed how Dorset Council is performing in its efforts to tackle the Climate and Ecological Emergency.

In one of its first acts after the unitary authority was formed in May 2019, Dorset Council declared a Climate and Ecological Emergency and, following extensive development and consultation, a Climate and Ecological Emergency Strategy (CEES) and action plan was adopted by full council in July 2021, with an agreement to report progress twice a year.

The CEES is a long-term strategy which sets out 41 objectives under nine topic headings. It sets carbon targets and identifies key areas where the council can both reduce its own carbon footprint and support the whole of Dorset to become carbon neutral.

The latest progress report has been released amid increased criticism from environmental campaigners that the council is not doing enough to tackle climate change.

Recent protests have seen campaigners attempt to glue their hands to a desk in the Dorset Council chamber, and display placards outside County Hall.

Dorset Council was recently accused of hypocrisy, having passed a motion to urge the government to secure permanent UK energy self-sufficiency, utilising whatever forms of energy generation sourced from within the UK are necessary to this end.

Opponents said this could give free reign for fossil fuel extraction or nuclear power in Dorset and the decision was criticised by Lyme Regis and Charmouth’s new Green county councillor, Belinda Bawden, in her maiden speech at Dorchester.

However, key headlines from the progress report include:

The progress report outlines the council’s key progress, but also includes the next steps to be taken under each of the nine topics. The full progress report can be found on the Dorset Council website.

Cllr Ray Bryan, Dorset Council’s portfolio holder for Highways, Travel and Environment, said: “It’s important to make sure everyone is kept up to date with how we’re getting on delivering our Climate and Ecological Emergency Strategy and action plan, and I’m especially pleased that Dorset residents will be able to see that these works are gaining real momentum now.

“As a local authority, we must deal with many competing priorities, but our commitment to delivering on our CEES ambitions remains steadfast. Much has already been delivered, both by Dorset Council directly but also working with a multitude of partners.

“There is no one single point of success or failure defining whether we will be successful; the journey to a decarbonised Dorset will involve us all.

“We will continue to work towards our goal to become a carbon-neutral council and putting in place the necessary actions and partnerships to accelerate the journey towards a carbon neutral Dorset.

“I welcome the opportunity to discuss with all interested parties what their views are on concrete steps that can realistically help us accelerate our ambitions, balancing the social and economic needs of all residents, especially the most vulnerable.

“I am absolutely committed to making Dorset the best in class, and I know that we have all of the ingenuity, passion and capabilities to achieve this.”

Climate change a ‘code red for humanity’ – but what can we do here in Lyme Regis?

“CLIMATE change is widespread, rapid and intensifying”, “Code red for Humanity” – surely no-one could have missed these headlines on the publication of the Intergovernmental Panel of Climate Change (IPCC) report, published on August 9? […]

PLASTIC Free Lyme Regis is starting a new shopping bag initiative to help rid the town of plastic waste, to be launched in the autumn. […]