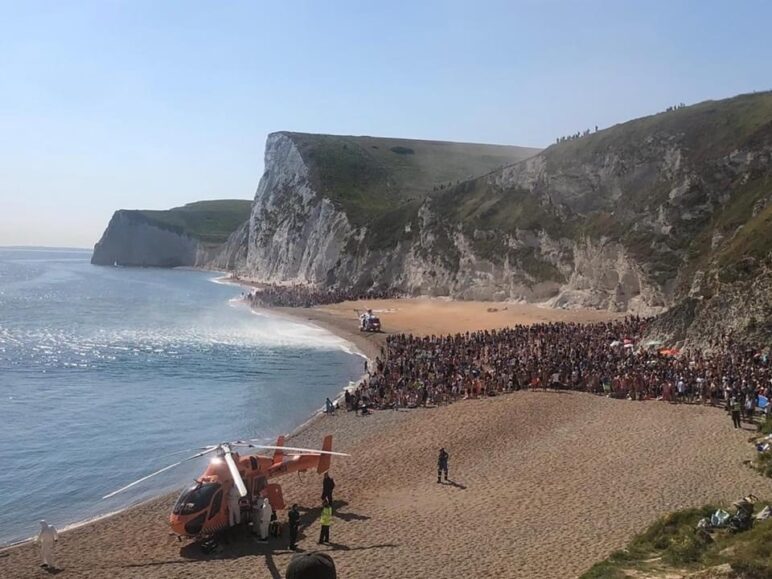 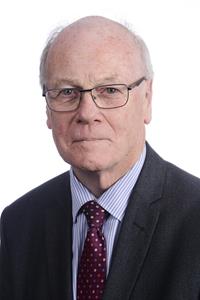 THE leader of Dorset Council has written to the Prime Minister calling for travel restrictions to be reintroduced after events at Durdle Door over the weekend saw three people seriously injured and huge crowds pushed together on the beach.

His plea comes after huge crowds descended on Dorset beauty spot Durdle Door over the weekend, where three people sustained serious injuries after tombstoning from the top of the cliff.

Two helicopters landed on the beach to treat the casualties, resulting in hundreds of people being forced together in a crowd in the centre of the beach and sparking major concerns about the lack of social distancing.

Cllr Flower said: “Over the weekend we have seen some extremely disappointing behaviour from visitors to Dorset’s beaches. I am acutely aware of how worried and upset many Dorset residents feel about the current situation, particularly when so many of them complied fully with lockdown guidance and when the Dorset Council area had one of the lowest COVID19 infection rates in the country.

“The incidents at Durdle Door on Saturday placed a huge strain on our emergency services. There have also been issues in other areas over the weekend with excessive numbers of visitors and people therefore not able to observe social distancing.

“We’ve seen littering, people urinating and defecating in public, people camping overnight (which is not permitted under current government COVID-19 guidelines) and people having dangerous campfires and barbecues – despite extensive warnings against this from all local agencies. Council employees have been abused by the members of the public as they tried to manage the traffic.

“My overriding priority throughout the COVID-19 outbreak has been the safety and wellbeing of Dorset residents and all decision-making has been based on this. We at Dorset Council have done everything we can within the limited powers we have to prepare for and respond to the situation.

“For several weeks now we’ve been sending out a strong message that potential visitors should ‘think twice’ about coming to Dorset. This ‘Think Twice’ message has been used widely across the country. We’ve managed the opening of car parks and public toilets very carefully in order to cope with demand and manage safety issues, without inadvertently giving out a signal that Dorset is ‘open for business’.

“However, since the government announced on Sunday, May 10 that lockdown was to be gradually eased and that people can ‘travel to outdoor open space irrespective of distance’, both we and Dorset Police have had very limited powers of enforcement. For example, since the recent guidance came into effect, the police are no longer been able to challenge road users as to whether their journeys are essential.

“All public services are very stretched due to weeks of responding to the COVID-19 outbreak and other major incidents, such as the wildfire at Wareham Forest.

“Today I have written to the Prime Minister, Boris Johnson, and to all Dorset MPs on this issue. My plea to the government is to review the unrestricted travel guidelines currently in place and require  people instead to ‘stay local’.

“The current guidelines have a disproportionately negative effect on areas like ours which are popular with visitors but do not have the infrastructure to cope right now. I am worried that we will see a second wave of infection here in Dorset as a result of the high number of visitors to the area over recent days.

“I’m asking the government to act now to save the lives of Dorset residents. Please help us to help them by issuing revised guidance telling people to stay local for the time being.”

You can read Cllr Flower’s letter to the Prime Minister by clicking here.

A Dorset MP has also blasted the behaviour of those on Durdle Door beach over the weekend, saying it could result in a second spike of COVID-19 and see the local area put back on full lockdown.

Discussing the lockdown rules on ITV’s ‘Good Morning Britain’ today, Bournemouth East MP Tobias Ellwood said: “The bigger point to be made as we ease the lockdown rules, we saw this on the coast in Dorset in Bournemouth and indeed Durdle Door, where people are operating by guidelines at work… as soon as we look at recreations, those rules go out the window.

“I’m really concerned that Dorset is going to move up the R rating to above 1 and we will be the first place to get that second spike.”

When discussing the two-metre social distancing rule, he later added: “‘My bigger concern is at Dorset beach they weren’t even honouring the one metre rule and that will impact all the amazing work in keeping those numbers down in getting us through the peak. I’d hate to see Britain go back up.”

Supporters say farewell to TIC staff as it closes down

STAFF from Lyme Regis Tourist Information Centre were given a fond farewell last Friday, as the office closed its doors permanently. […]

A MAN and two women were arrested at Monmouth Beach in Lyme Regis this afternoon (Monday) after two children were found locked in a car. […]