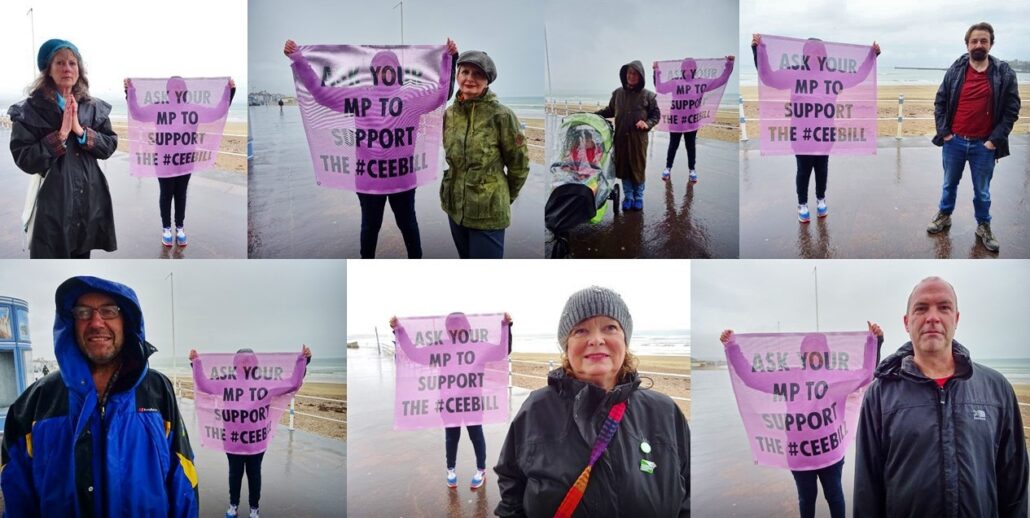 AS part of a nationwide action, volunteers from the Dorset Climate and Ecological Emergency (CEE) Bill Alliance hosted COVID-compliant banner drops this week, calling on Dorset MPs to back the bill.

A banner was dropped by the clock tower on Weymouth Esplanade reading ‘Be The Change – ask your MP to support the CEE Bill’, and at Maumbury Rings in Dorchester a banner read ‘Back the Climate and Ecological Emergency Bill now’.

It is hoped the banners would catch the attention of Dorset MPs Richard Drax, Simon Hoare, Chris Loder, Christopher Chope and Michael Tomlinson and encourage them to support the CEE Bill, which is currently awaiting its second reading in the House of Commons.

Penny Quilter from Rodwell, Weymouth, said: “Richard Drax has replied to my letter saying he would not sign the bill as ‘the government are already taking this issue incredibly seriously’.

“How can a government who are continuing to allow airports to expand, allowing new coal mines to be built and cutting £1billion from green homes grants be taking the climate crisis seriously?’”

Irene Anne from Preston, Weymouth, continued: “I am frightened that I won’t be able to insure my home in Weymouth as sea levels rise. I’ve worked all my life for my home and unless the climate crisis is tackled my house and many others will be worthless.”

The banners were dropped on the day the CEE Bill was due its second reading in the House of Commons.

Caroline Lucas MP presented the bill in parliament on September 2 2020 and it was due for further debate on March 26  but the coronavirus pandemic has impacted the parliamentary process and postponed the second reading.

The bill is currently waiting for a new date to be set, expected in May this year.

The CEE Bill is supported by more than 100 MPs from eight political parties – including Labour, Scottish National Party, Plaid Cymru, Liberal Democrats and the Green Party.

It calls on the government to take account of the UK’s entire carbon footprint, to protect nature in the UK and to prevent ecological damage along supply chains. It also establishes a citizens’ assembly to ensure that these changes are achieved in a fair and just way.

If the bill is passed, it will unlock resources that will help local authorities such as Dorset Council implement their Climate and Ecological Emergency Action Plans.

Campaigners said the CEE Bill is the only legislative plan before MPs that aims to tackle the climate-nature crisis at the speed and scale that science demands, setting out a viable roadmap for the UK to play its full and fair role in restoring nature and limiting its emissions.

A petition by Dorset CEE Bill Alliance asking all five Dorset MPs to back the CEE bill has already gained more than 380 signatures. You can add your name at https://www.change.org/Ask-All-Dorset-MPs-to-Support-the-CEE-Bill

THE sad news of the passing of former leader of the Lib Dem’s Lord Paddy Ashdown is a great loss to the country, his family and all who knew him. […]

Scout group hopes to make a difference to environment

AS harbours and marinas have reopened and people get back to sailing and boating, Litter Free Coast and Sea and Natural England have joined together to ask boat users to think about where they are going to the toilet. […]