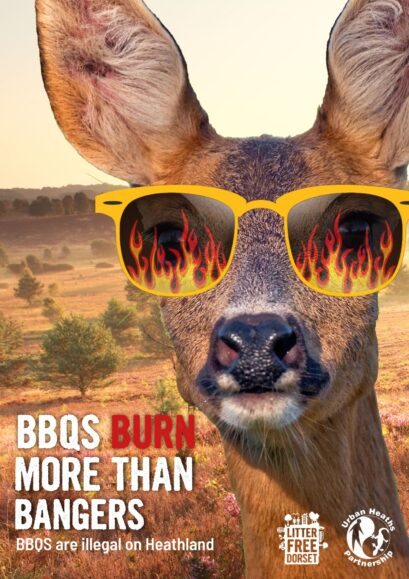 A NEW campaign has been launched to remind the public that barbecues are illegal on heathlands.

Litter Free Dorset, the Urban Heath Partnership and Dorset & Wiltshire Fire and Rescue Service have announced the launch of new the campaign, ‘BBQs Burn More Than Bangers’, to prevent wildfire.

Heathlands, unfortunately, are often misused and incidents of arson – whether deliberate or accidental – are becoming more common. On average, Dorset is subject to more than 100 heathland wildfires a year, a high proportion of these can be attributed to a heathland barbecue gone wrong.

The fire service has already put out a warning to stay safe and vigilant during the current dry weather spell following an amber wildfire alert.

The new campaign aims to raise awareness that it is illegal to barbecue on heathland and instead promote the use of alternative, safe, designated barbecuing destinations.

Why is it so important?

Dorset’s 8,500 hectares of heathlands are one of the most biodiverse ecosystems in the UK and are home to thousands of species of flora and fauna, plus 450 species that are recognised as rare, threatened or protected.

Found on the heathlands are 12 known bat species, all six native species of reptile as well as smaller birds and raptors, including the Dartford warblers, nightjars, hen harriers, merlins and ospreys.

Located around the fringes of many of Dorset’s heathlands are residential areas. Heathland wildfire can really impact the health and safety of these local communities, due to residents having to evacuate, fire damage to properties and risk of lives lost.

The organisations behind the campaign want to help protect both the rare heathland wildlife and the livelihoods of those living nearby Dorset’s fantastic heathlands by reminding the public that it is illegal to barbecue on a heathland and to use an alternative, designated safe barbecuing site instead.

How you can get involved and help reduce fires

You can help by not barbecuing on Dorset’s heathlands – either pack a picnic or visit one of the suggested, designated barbecuing spots instead, which you can find on the Litter Free Dorset website www.litterfreedorset.co.uk

Other ways to support the campaign are as follows:

Lyme to lose out as police merger scrapped

THE proposed merger on Dorset Police with Devon and Cornwall would have been “superb” for Lyme Regis had it gone through, Police and Crime Commissioner Martyn Underhill has told local councillors. […]

POLICE and Crime Commissioner David Sidwick has unveiled his Police and Crime Plan aimed to make Dorset the safest county in England and Wales. […]

A NEW partnership between local banks and Dorset Police has prevented over £330,000 getting into the hands of fraudsters in the first four months of this year.  […]