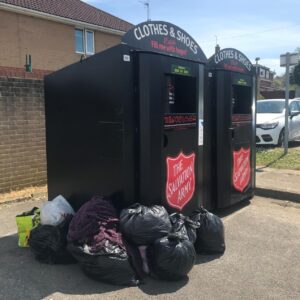 IF you are looking to donate items such as clothing using a recycling bank in a car park, Dorset Council is asking you to keep hold of them until the current pandemic has passed.

Dorset is a county of keen recyclers, among the best in the country for dealing with their waste responsibly by reducing, reusing and recycling.

Many have taken the opportunity during the lockdown period to clear out their wardrobes, hoping to donate unwanted clothing to charity. Others have continued to gather up their cartons, foil and small electrical items to take to a recycling bank in a car park.

However, most recycling banks in Dorset Council car parks are not currently being emptied as they rely on volunteers and services that have been suspended due to the COVID-19 pandemic.

Despite this disruption, some people have taken items to the car parks and left them in bags outside or next to closed recycling banks. Not only is this considered to be fly-tipping, but it is most likely that the contents will be spoiled and unfit to be donated or recycled, ending up as regular rubbish.

On one day last week, street cleansing crews in East Dorset picked up 22 black bags of items that had been left on the ground next to banks.

Most of the bags being left behind contain clothing. The Salvation Army, which service Dorset Council’s clothing banks in car parks, said: “While we are grateful for donations, we ask that people refrain from leaving bags of donations next to clothing banks and outside charity shops, as lockdown restrictions mean they cannot be collected and they will instead be sent to landfill sites.

“Losing these donations to landfill will cost the charity thousands in lost stock as well as being an environmental disaster. Money raised from textile reuse and recycling benefits us as well as many national and local community-based charities. Our Lifehouses (homeless hostels) and food banks are just some of the vital services supporting people hardest hit by the coronavirus.”

If you have items that you would usually take to a recycling bank in a car park, please wait until the banks are being emptied again, consider if there’s another way to deal with them while maintaining social distancing, or reduce what you produce.

As soon as volunteer, staff and resource levels return to normal, the council will ensure all recycling banks are opened back up and will make an announcement.

Cllr Tony Alford, Dorset Council’s portfolio holder for Customer, Community and Regulatory Services, said: “We appreciate the enthusiasm of Dorset residents to recycle clothing that they no longer need.

“But dumping it on the ground by the side of a recycling bank or outside a charity shop is fly-tipping and this clothing is more likely to end up being treated like household rubbish rather than be recycled.

“We ask everyone to be patient and to hold on to their clothing and other items until the containers are ready to be serviced again.”

Increase to car parking charges could be reversed

INCREASED car parking charges, which have been agreed without consultation by Dorset Council, may yet be reversed. […]

FIRST doses of the COVID vaccine will stop being offered at Bridport Medical Centre from March 29 until further notice due to national supply issues. […]

Dorset residents urged to be vigilant against lockdown scams

CONCERNS have been raised over the emergence of new types of scams which try to take advantage of vulnerable households in Dorset during the COVID-19 lockdown. […]