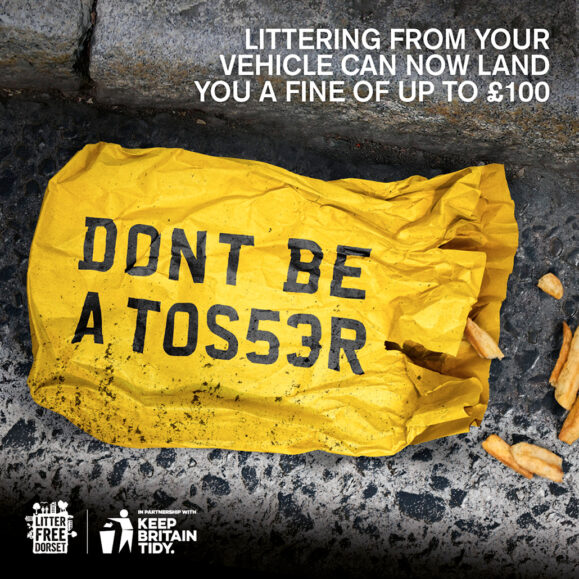 LITTER Free Dorset’s ‘Don’t be a TOS53R’ campaign was launched last year,  aimed at people who throw their rubbish out of car windows.

It was designed to send a hard-hitting message to drivers and their passengers that our roads are not a network of litter bins – and that the owner of a vehicle can be fined up to £100 if rubbish is seen being thrown out of a car window.

Litter Free Dorset implemented the campaign in partnership with Keep Britain Tidy, whose research shows that 33% of people don’t know that the vehicle’s owner can now be fined if someone else throws rubbish out of it – including cigarette butts.

New rules that came into force in April last year mean that local authorities can fine the owner of a littering vehicle without having to prove who threw the rubbish.

Keep Britain Tidy chief executive Allison Ogden-Newton said: “The mindless act of tossing plastic bottles and fast-food wrappers out of car windows is doing damage to our environment and our wildlife.”

Billboards, bus shelters and vans across Dorset have displayed the ‘Don’t be a TOS53R’ message over the last year. This summer, Litter Free Dorset is targeting tourists through a social media campaign.

Litter picking costs the UK £1billion to clear litter every year, and when tossed from vehicles can cause accidents and injure our wildlife. Cigarettes are the most littered item in the world and with 75% of smokers reporting that they dispose of cigarettes on the ground or out of a car.

Litter Free Dorset is made up of a group of local organisations, charities and community groups which all work together to reduce the social, economic and environmental impacts of litter. This is done by trying to stop littering behaviour in the first place through co-producing policy, projects and campaigns.

THOSE passionate about the environment are invited to contribute to a new working group focussed on how Lyme Regis can help mitigate climate change. […]

AS part of their anti-fly-tipping activities, which includes the highly successful Tip-Off campaign, Dorset Waste Partnership (DWP) is looking at new ways to fight the blight of illegal carrying and dumping of waste. […]

SIDMOUTH Road in Lyme Regis will be closed for resurfacing work from Monday, January 14 until Thursday, January 17. […]