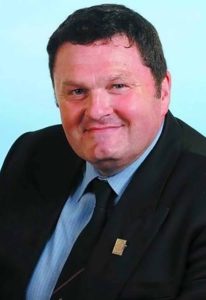 Announcing his decision to step down on social media, the Conservative councillor said: “Unfortunately, because of issues within the council, I can’t find it in my heart to continue. I wanted innovation, working at pace and, to be honest, a little less risk aversion.

“If you believe dear old Boris and his followers have problems then I can tell you the same mentality appears at other levels of government.

“Dorset Council will continue increasing your council tax even though it’s one of the country’s highest and will still be overspent. With no real drive towards creating income streams and easing your burden.”

Addressing recent rumours that he will be moving to Wales, Cllr Turner continued: “For me, it’s got to be at least one more adventure – a Welsh one.

“Mark Twain wrote: ‘Twenty years from now you will be more disappointed by the things that you didn’t do than by the ones you did. So throw off the bowlines. Sail away from safe harbour. Catch the trade winds in your sails. Explore. Dream. Discover.'”

Cllr Turner – who served on the former West Dorset District Council before being elected the county representative when Dorset Council was formed in 2019 – went on to call out Dorset Council leader Spencer Flower, who was reportedly heard saying that Cllr Turner would not be selected as a Conservative candidate again during a virtual meeting of the council in July last year.

His scathing statement continued: “Personally, I cannot forgive the words uttered by the ‘leader’ (I use the word, tongue in cheek) during the break at a full council meeting, to say: ‘Daryl Turner won’t be selected again, won’t be selected as a Conservative’. I felt that it broke a number of principles.

“Having worked with true leaders over many years in the forces, it should not have been said and wouldn’t have been said by them. By leaving his microphone on, it became an analogue mistake in a digital world. So much for a code of conduct or Nolan Principles!

“More importantly, declaring openly that there is no Conservative whip and saying those words should send a message to the electorate that Conservative councillors seemingly have to tow the line – or else! That really should be a deep concern.

“For information I did make a formal complaint against the leader; I asked for a voice recognition expert to be used and was told by the monitoring officer it wouldn’t be required. Like him and many others, I know it was Cllr Flower speaking those words.

“The outcome was an apology from Cllr Flower even though he says he ‘didn’t recall making the remarks’! We have a pathetically weak, standard process, I think we are all aware of that; however, I think the monitoring officer’s decision not to pursue an investigation was questionable.”

Cllr Turner then went on to comment on the recent in-fighting seen at Lyme Regis Town Council, on which he also used to serve.

‘You need and deserve much better’

“To my dear patch, Lyme and Charmouth, it will soon be time to elect a new councillor,” he continued.

“Let’s hope for a refreshed, newer model with plenty of get up and go. We don’t want any of the old school, divisive versions we see in the town council; you need and indeed deserve much better. Get the headlines you want, not those which drive the area and councils downward.

“My last working day is Valentine’s Day, February 14, and I’ll seal it with a kiss. I’ve enjoyed most of the many years I’ve represented my patch and hope I’ve helped lots of you on many occasions. My list of outstanding items has gone to the clerks.

“Wishing you a bright, younger future, all the very best, Daryl.”

Responding to Cllr Turner’s statement, Cllr Flower said: “The resignation of Daryl Turner as a Dorset Councillor has been anticipated for some months, following his move to Wales.

“I am aware of his deep-rooted disappointment when he was not offered a position on the Cabinet following the May 2019 elections and it was equally disappointing for all his colleagues that Daryl found being team player such a challenge.

“However, Daryl has been a faithful councillor to his ward and we all wish him well with his new life closer to his family in Wales.”

Jonathan Mair, Corporate Director – Legal and Democratic at Dorset Council, who is also the council’s statutory monitoring officer, added: “As monitoring officer part of my role is to help councillors to maintain high standards of conduct.

“I also oversee the arrangements established under the Localism Act 2011 for the assessment and if necessary the formal investigation and hearing of complaints about councillors.

“One of  the strengths of our arrangements for assessing complaints about councillors is the involvement of independent persons.

“These are independent people from outside the council who give their time to advise on complaints about councillors, including whether a complaint is serious to warrant a formal investigation.

“I can confirm that, whilst he was still a councillor, Mr Turner did complain to me about a remark that he said had been made by Cllr Spencer Flower. I referred the complaint to an independent person who advised that, if Cllr Flower was to apologise, there was no need for an investigation.

“Cllr Flower had no recollection of making the remark complained about, but in order to avoid taking up time in an unnecessary investigation he apologised to Mr Turner.

“In line with the advice of the independent person I was satisfied that no further action was needed.”

Dorset Council will issue a notice of casual vacancy next week. For a by-election to be called, two registered electors from anywhere in the Dorset Council area will need to write to the council asking for the vacancy to be filled by election.

Once the two signatories are received, Dorset Council will publish a notice of election – and a by-election will then be held, following the usual arrangements.

Council incurs additional costs of £13million a month amid pandemic

DORSET Council is incurring additional costs of £13million per month as it supports residents, communities and businesses through the ongoing COVID-19 crisis. […]

How to handle household waste if you have COVID-19

DORSET Council is reminding residents what to do with their waste if someone in their household is showing symptoms of COVID-19 infection. […]

LOCAL authorities across the South West have received an extra £160million from the government to help them deal with the coronaviris pandemic, but Dorset Council has already warned this will not be enough.  […]