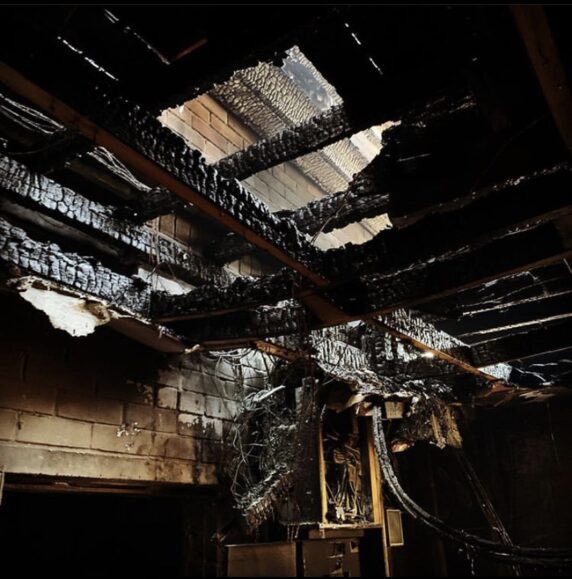 UP to 10 fire engines tackled a blaze at the Rousdon Village Bakery on Tuesday morning.

Devon & Somerset Fire Service were called to a fuse box on fire at the property at 8.40am. Engines from Lyme Regis, Colyton and Axminster attended, as well as an aerial ladder platform from Danes Castle and a supporting officer.

On arrival crews confirmed the consumer unit involved in fire and got to work with two breathing apparatus and a CO2 extinguisher.

One person who was inside the bakery managed to escape unharmed before the crews arrived on scene.

At 9.14am, back up was requested and another three engines attended from Sidmouth and Bridport, as well as various supporting appliances and officers.

The A3052 through Rousdon was closed in both directions for several hours to allow emergency services to deal with the incident and did not fully re-open until 4pm.

The fire involved a three-storey building including the bakery, garage workshop next door and two flats above.

A woman and two children – a three-year-old boy and seven-year-old girl – who lived in one of the flats above have lost their home and possessions. Anyone wanting to donate clothes, etc. should get in touch with LymeOnline for the appropriate contact details.

The Rousdon Village Bakery is a popular eatery and a lot of refurbishment work had recently been carried out to open its new ‘roadside grill’ on the forecourt of the former petrol station.

Owner Clive Cobb released images of the damage on his Instagram account this afternoon, thanking the fire service and saying the bakery would be “closed for a while”.

Watch our special LymeOnline News Bulletin for the latest news and images from the fire:

COUNCILS across England have today been allocated their share of £500million for highways maintenance, with the South West receiving the largest amount. […]

A 27-year-old man from Colyton died following a collision on the A35 at Raymonds Hill, between Lyme Regis and Axminster, yesterday (Thursday). […]

Guildhall struck twice this week while repairs are being carried out

THE Guildhall in Lyme Regis has been struck by passing vehicles twice this week, while repairs have been carried out to fix previous damage. […]

Looking for somewhere to dine out this weekend? You can find a list of Lyme Regis pubs and restaurants with outdoor dining here👇 If we've missed you off the list, let us know and we'll add your for FREE! #lymeonline #lymeregis #dorset https://t.co/Okgy2LGxxW
View on Twitter
0
2