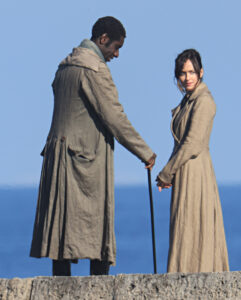 AMERICAN actress Dakota Johnson, known for her role in the ‘Fifty Shades of Grey’ movies, has been spotted filming a period drama in Lyme Regis.

Crews have been filming scenes for Netflix’s “modern and witty” adaptation of Jane Austen’s ‘Persuasion’, a novel partially based in Lyme Regis, this week.

Dakota, who plays the story’s heroine Anne Elliot, was seen filming on the historic Cobb wall.

She is the biggest film star to be seen in Lyme Regis since the filming of ‘Ammonite’, which brought Kate Winslet and Saoirse Ronan to town in March 2019.

Horse-drawn carriages and other film props have also been seen in the harbour area, and the film crews took over sections of Holmbush and Monmouth Beach car parks to use as their base.

Stars of the ‘Persuasion’ adaptation were also seen filming in the Salisbury area earlier this month.

‘Persuasion’ is the story of Anne Elliot, a young woman persuaded not to marry the man she loves as he has not yet made his fortune.

During the Napoleonic Wars, Captain Wentworth is successful and is rewarded for his role. Years later, they meet again as their friends and family holiday together in a trip to Lyme Regis.

The story includes a famous scene in which character Louisa Musgrove falls from steps on the Cobb.

Previous adaptations of the book have been filmed on the harbour wall.

In ‘Persuasion’, she describes “the principal street almost hurrying into the water, the Walk to the Cobb, skirting round the pleasant little bay, which, in the season, is animated with bathing machines and company… are what the stranger’s eye will seek.”

HOLLYWOOD actor Timothée Chalamet has been spotted in Lyme Regis this morning as filming for ‘Wonka’ gets underway.  […]