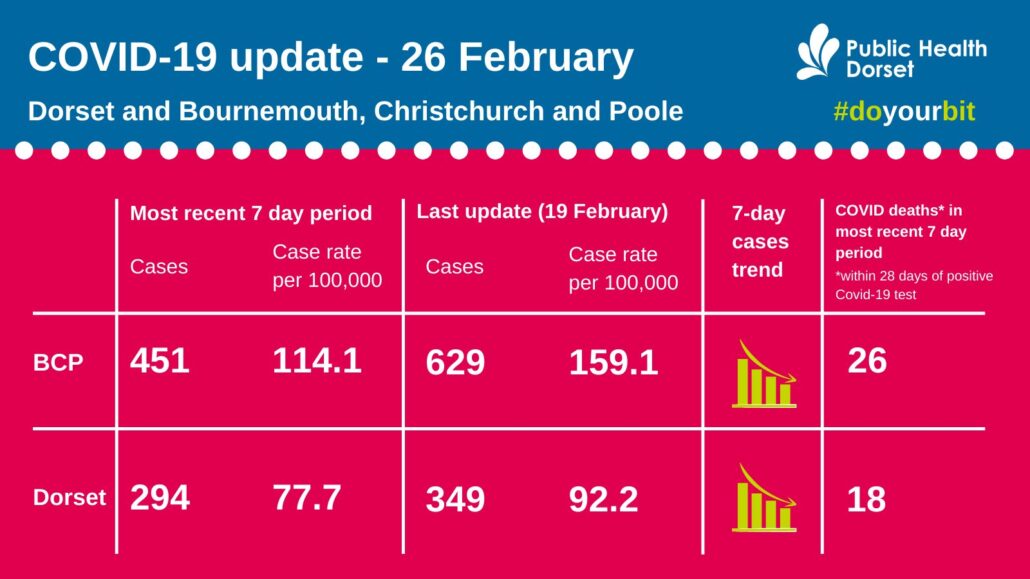 COVID case numbers, hospitalisations and deaths have continued to decrease across Dorset over the past week.

Confirmed COVID case numbers in the Dorset Council area in the seven-day period up until February 26 stood at 294, compared to 349 the previous week, and there were 451 cases in the Bournemouth, Christchurch and Poole (BCP) area, compared to 629.

This is just below the national average of 118.3 but is above the South West average of 70.2.

There are currently 147 COVID-19 patients in hospital beds across Dorset, down from 194 on February 19.

Up to February 21, 275,006 COVID vaccinations had been administered to people in Dorset. 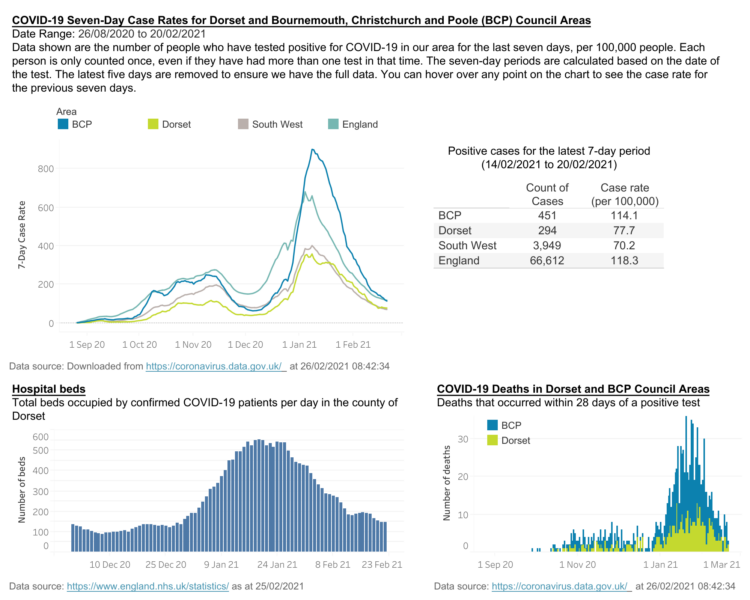 A spokesperson for Dorset Council said: “Both BCP and Dorset Council case rates remain above the average for the South West. This means we all need to keep working together to bring these rates down further.

“Over a quarter of a million people in Dorset have now received a COVID-19 vaccine. This is great news and we’d like to thank everyone involved in the rollout of the vaccination programme.

“However, we must remain vigilant and continue to follow the rules – even if you’ve had the vaccine – to avoid an increase in cases.

“This week the government announced the roadmap for lifting lockdown. This is a four-step plan for the easing of restrictions. It’s important to remember that the dates set out are the earliest possible dates for restrictions to be lifted.”

The government will use four tests to assess whether each step of the plan can go ahead:

COVID-19 cases numbers in Lyme Regis, Charmouth and the Marshwood Vale have remained low this week, with three cases in the whole area recorded in the seven-day period up until February 21

In neighbouring Uplyme, Kilmington & Colyton, there four cases recorded in the seven-day period up until February 21, an increase of two on the previous week.

In small areas where there are fewer three cases, full date is not given as to protect the identity of individuals.

Lyme Regis, Charmouth and the Marshwood Vale reported its first two coronavirus-related deaths in January 2021, according to new figures released by the Office of National Statistics.

Uplyme, Kilmington & Colyton recorded another one death in January  2021, bringing its total to three with two having been recorded in December 2020.

COVID death figures for February by local area will not be released until later in March.

You can find out more details on COVID case numbers in your local area at https://coronavirus.data.gov.uk/

Public consultation to be launched on Dorset Local Plan

A CONSULTATION on the Dorset Council Local Plan will be launched next week and will run until March 15. […]

HAVING spent seven weeks or so honing their putting skills on the kitchen or bathroom floor, many Lyme Regis Golf Club members took advantage of the golf course opening on Wednesday with the tee times were fully booked. […]