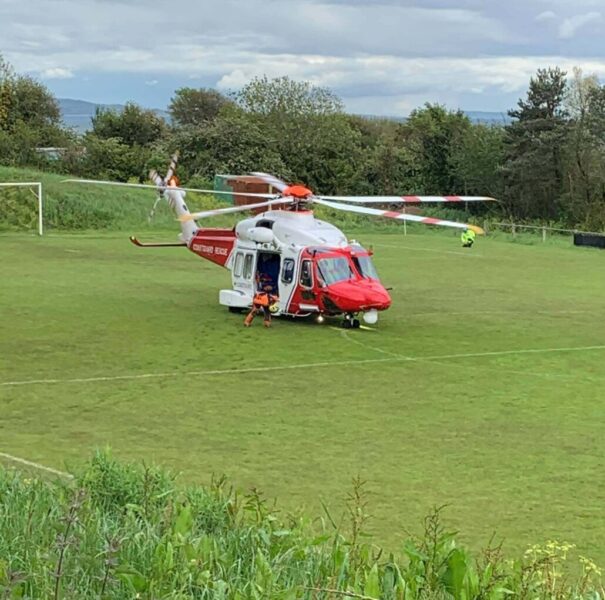 THE emergency services were scrambled following reports of people cut off by the tide at the notorious Black Ven landslip, east of Lyme Regis, on Monday afternoon.

Lyme Regis and West Bay coastguards were called at 4.40pm to reports of two people cut off by the tide between Lyme Regis and Charmouth.

The lifeboat crew was then called to assist at 5pm.

On arrival at scene, the two casualties were quickly identified and located. One member of the lifeboat crew swam ashore to check on the couple’s welfare, but as the lifeboat could not get close inshore to rescue them due to the sea conditions.

With at least two hours until the tide would have fallen sufficiently to allow access on foot, the coastguard helicopter from St Athan in south Wales was requested.

The two casualties and the lifeboat crewman were winched off the landslip and landed at Lyme Regis Football Club in Charmouth Road.

The casualties were cold but safe and well.

For emergencies on the sea, cliff, river, mud, harbour and beach, call 999 and ask for the coastguard.
JOIN OUR MAILING LISTStay up to date with all the news from Lyme Regis, Uplyme & Charmouth by signing up to our regular newsletter.

DORSET Police and Crime Commissioner has launched a survey asking residents about their experiences of anti-social behaviour. […]

DORSET  & Wiltshire Fire and Rescue Service (DWFRS) is warning the public to stay safe and vigilant over the next 10 days following an amber wildfire alert. […]

CRIME in Lyme Regis is causing local councillor Cheryl Reynolds to lead a drive to form a ‘DIY police force’, aimed at putting the eyes and ears of hundreds of informants all across the town. […]