SIX fire crews from the local area were called to a blaze on Hardown Hill at Ryall, near Morcombelake, on Thursday evening after a car was set on fire.

Charmouth’s fire crew was first on the scene, having been called out at 7.20pm to reports of a vehicle on fire. 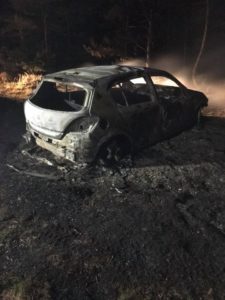 On arrival, they found that the car fire had spread to approximately one hectare of woodland/scrub and a further five appliances were requested – two heavy off-road vehicles from Bridport and Weymouth, and three light off-road vehicles from Maiden Newton, Beaminster and Chard – as it was difficult for larger engines to gain access to the fire because of its location.

Crews stayed on scene and made good progress throughout the night in tackling the blaze, which could be seen for miles around.

The incident has now been left with rotating crews of Land Rover pumps, each carrying out four-hour stints and continuing to dampen down the fire using hose reel jets and beaters.

It is anticipated that they will remain on scene throughout the course of today (Friday, September 7).

The cause of the fire was believed to be arson.

THE latest crime figures released by police show there were 31 crimes in the Lyme Regis, Charmouth and Uplyme area during November 2020.  […]

MEMBERS of Lyme Regis lifeboat crew, their families and friends welcomed Christmas on Saturday, December 8 at their annual dinner and presentation night. […]

DORSET Police has seen a 2.3 per cent drop in recorded crime, according to new figures released last week. […]