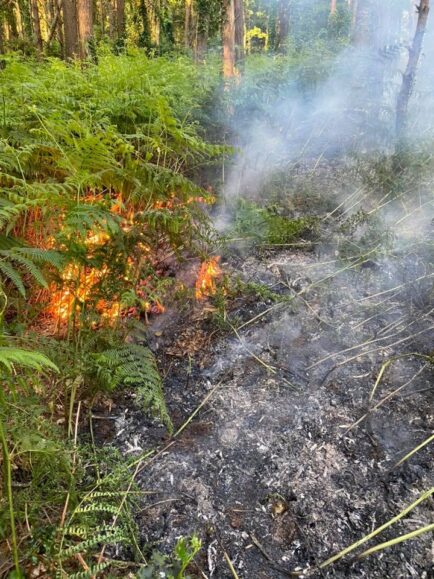 BRIDPORT and Charmouth fire crews are currently in attendance at a small forest fire on the top of Langdon Hill, near Morcombelake.

Due to the difficult location, Bridport fire crew requested the assistance of the off road Land Rover from Charmouth.

The fire was reportedly started by “a disposable barbecue and irresponsible people”.

It follows the recent Wareham Forest fire, also caused by disposable barbecues, which local crews tackled for over a week as it destroyed 220 hectares of forest

A spokesperson for Bridport fire crew said: “This was another avoidable incident, please listen to the advice not to have camp fires or use barbecues in the open.

“Reports from our media office state the risk of wildfire is higher than its ever been. Have fun but stay safe and protect the environment.”

A FISH supper hosted by Lyme Regis Sailing Club served up a £660 donation for the volunteers of the town’s lifeboat crew. […]

POLICE have advised residents in Lyme Regis to be more “security conscious” and are promoting the Neighbourhood Watch scheme to prevent crimes such as theft and burglaries. […]

THE family of a man who sadly died following a collision in Charmouth has issued a tribute. […]