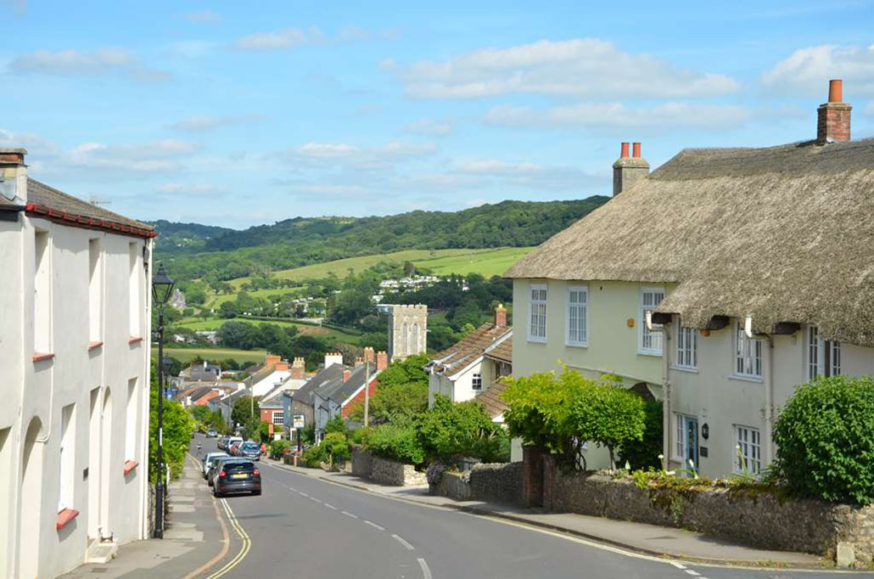 A special feature reflecting on how Charmouth coped with COVID-19, by Chris Lakeman Fraser

ONE week before the first lockdown my daughter and her partner were agonising over a decision to live separately until the end of the crisis.

He was a doctor supervising a COVID-19 ward at a time when little was known about the virus.

My daughter phoned and asked whether she could come to live with us in Charmouth. Of course and welcome! She arrived with baby, a large hairy dog and a range of masks, disposable gloves and cleansing wipes.

She was aware that over time her partner came to realise the seriousness of the situation when he said: “I feel like I’m living in a war zone, but not knowing where the enemy is.”

Shortly after we had sorted out the new living arrangements, a young woman appeared at our gate. “I’m Rachel. Let me know if you want any shopping done.”

She was a complete stranger and yet she was offering us help. Astonishing!

She handed us a leaflet explaining that she was part of a group of volunteers helping people that were isolating.

Prior to lockdown, handyman and firefighter Tim Holmes had picked up shopping and prescriptions for a few elderly neighbours. When the virus took off he became swamped by many more calls for help and appealed for support on the Charmouth Notice Board Facebook page.

Within 20 minutes he had 20 offers of help and the numbers kept rising to 80.

“One of the first volunteers was Judy Fellingham from the local estate agents,” he said.

“She and I met and chatted about what could be achieved and made plans for a leaflet delivery to all the households in the village.”

Jo Seaman, former British Council leader and author, also saw the Facebook page and thought that the rapidly-increasing supply of helpers might need a bit of co-ordination.

“During my career I managed teams of people living through some challenging circumstances around the world including a break-down in law and order in Georgia,” she said.

“I always like to find ways to bring a sense of calm control if I can to what could be, or was, a dangerous situation.”

Jo called Tim and offered to help pull together a spreadsheet. Within hours they had put together a Facebook Messenger group of the volunteers.

They were joined by former school teacher Melanie Harvey and, within a week, Tim, Jo, Judy and Melanie were talking every few hours at first by phone and then via Zoom.

Tim came through with a brilliant idea to complete an information leaflet.

He said: “I thought of the classic Thumbs Up image. By turning the poster upside down, anybody, not just volunteers, could see a person might need assistance.”

She devised ways to help shops in Charmouth and liaised with the parish council. She also wrote a series of leaflets to send round the village.

Lastly, she raised £1,700 from the Dorset Coronavirus Community Fund to finance the group.

As well as organising the volunteers and acting as a street-co-ordinator for her area, Melanie got to work setting up a data protection policy and designing e-forms for volunteers to complete every fortnight. Then she compiled a table of all the volunteer organisations in Charmouth.

Once the project took off, volunteers delivered leaflets to 930 households containing details of street co-ordinators and information from the government, the NHS, Dorset Council, the police and local restaurants and shops that did home deliveries.

About 160 of these households took up the offer and volunteers delivered shopping and prescriptions to them, gave telephone support and even walked dogs.

“I was amazed how it came together and continued to grow throughout those first months,” said Tim.

“I became more of a trouble-shooter, including placing a large, dry-wipe board outside Morgans the newsagent so that passers-by could see the information we were using on the internet.”

Other institutions within the village were modifying their operations at speed and liaising with the volunteer group.

April Boyle, practice manager, said: “There was never any pause in service but staff initially moved to working alone in the office until the reception area was fitted with screens and a full cleaning programme was introduced between each contact with patients.

“We consulted with them by the telephone wherever possible. If they needed to be seen face to face, this was agreed between them and the clinician.

“If, however, there were any symptoms of COVID-19 they would need to be seen at either a hot site or red site located in Lyme and Bridport.”

Pharmacist Guang Yang said: “Back in March last year our prescription volume increased by about 20 per cent due to people stocking up on prescription items and other household essentials.

“We had to increase our staffing level to match the demand and without the extra work put in by them and myself, we would have had long queues stretching down the street similar to pharmacies in Bridport.

“I can’t praise the volunteer group highly enough. Most vulnerable people had made contact with designated volunteers directly but there were others who were isolated and required our assistance in finding the correct volunteer.”

At the start of lockdown co-owners Alex and Maria Tritton reported that many of their staff had left because they were living with elderly relatives who were vulnerable.

Requests for weekly deliveries had jumped from eight to 156, leaving Maria close to breakdown.

“So many people came to help including the local school teacher before he started school,” she said, “and loads of local builders came in to do deliveries for us.

“Charmouth as a whole was really good. But we also had the stress of people that weren’t supposed to be here who had heard that we had stuff.

“A man came in one day wanting to buy six chickens despite the fact we had signs on the fridges and freezers saying you can have one. He was very rude.

“Other people didn’t have masks and didn’t want to sanitise their hands.”

Alex continued: “We saw the worst part of some people and the best part in others. In the first year we struggled, not having any tourists and a shortage of drivers and staff.

“We got through because our 16-year-olds, who weren’t at school and helped us out.”

Maria agreed, adding: “All of our staff have been absolutely amazing.”

Experiences of the volunteers

Julie Leah, a gardener, volunteered to do some deliveries for Charmouth Stores for a few months.

She said: “The appreciation of the elderly recipients made up for that completely because despite their cheerfulness and wanting to fend for themselves, they were much in need of the service.

“A relatively small effort and time on my part made me feel far more included in the community.”

Fellow volunteer Lorna Cowan commented: “I worked full-time from home so could be fairly flexible in keeping all my neighbours informed about the days of the week when I was going to the supermarket.

“I tried not to think too much about the additional risks and was extremely careful to follow all the guidance from government, health officials and Jo.

“I always put shopping on the doorstep, rang the bell and then walked away. I kept sanitiser on me at all times, and washed my hands frequently — almost every time I passed a tap!

“I now know my neighbours better than I did before the lockdown.”

Melanie added: “At the beginning I can remember the shock of the announcement that we were all to stay at home and how quiet the roads were.

“I was walking my patch at least once a day since I thought it was important to be visible and might notice any changes in the houses. However, spending time at home with my family was quite special in hind sight.”

Jo continued: “The pandemic was such a momentous threat that affected all of us. It was wonderful to be part of something where we felt we were able to help other people, even if we didn’t meet them.”

Tim concluded: “Once we all knew how this COVID pandemic was evolving, we evolved with it, yet it’s not finished – there are still volunteers working for their streets.”

This has been a brilliant example of a community coming together rapidly with enthusiasm and innovative ideas to confront a major crisis.

It could become a template for dealing with other local emergencies including climate change.

In fact, based on lessons learnt during the pandemic, plans are afoot to meet with the Charmouth Parish Council to create a general emergency plan for the future.

LymeOnline editor Francesca Evans is joining the nationwide 2.6 Challenge to help save UK charities which are struggling to fundraise during the coronavirus pandemic. […]

COVID cases rise across Dorset in line with national picture

IN line with the national picture, Dorset continued to see an increase in COVID-19 cases across the county this week.  […]

How are bin collections being handled during virus epidemic?

BIN collections are one of Dorset Council’s most important services, provided to over 200,000 households across the county. […]