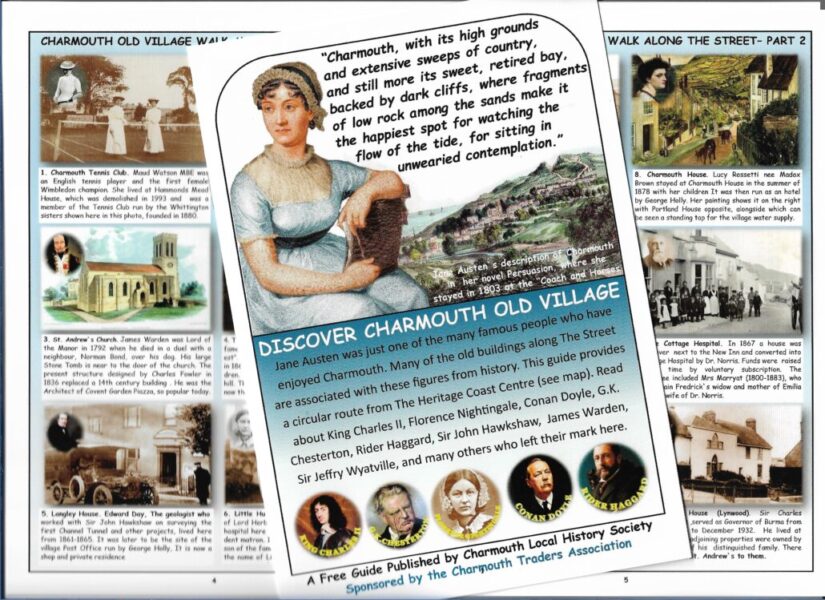 With the help of Charmouth Traders, which funded the whole printing of the leaflet, this free, eight-page leaflet with map is free from any business in Charmouth, from shops on The Street to guest houses.

The leaflet is a guide to more than 25 historical houses in Charmouth and their importance, from King Charles II and The Abbots House, to Jane Austen’s stay at the Coach and Horses.

Other notable village connections include G.K. Chesterton, Florence Nightingale, Conan Doyle and Rider Haggard, and James Harrison who in 1858 lived in the village and, being a keen fossil collector, sent specimens to Professor Richard Owen who named the Scelidosaurous Harrisonii after him.

Helen Parker, chair of Charmouth Local History Society, said: “We new the leaflet with map was popular encouraging a walk around the village purely because we ran out by the end of the summer of 2020.

“So after many requests for more I contacted Phil Triton of Charmouth Traders for help and they stepped in and funded a reprint of 2,000 copies.

“It is amazing; Charmouth is more than a beach, it is a thriving village with a long history. The strong sense of community is exemplified by the continuous support of Charmouth Traders.”

Jane Austen said in her novel ‘Persuasion’: “Charmouth, with its high grounds and extensive sweeps of country and still more it sweet retired bay, backed by dark cliffs, where fragments of low rock among the sands make it the happiest spot for watching the flow of the tide, for sitting in unwearied contemplation.”

THE Lyme Regis Society is celebrating the launch of the latest in a series of books about the fascinating history of some of the town’s most remarkable architecture. […]