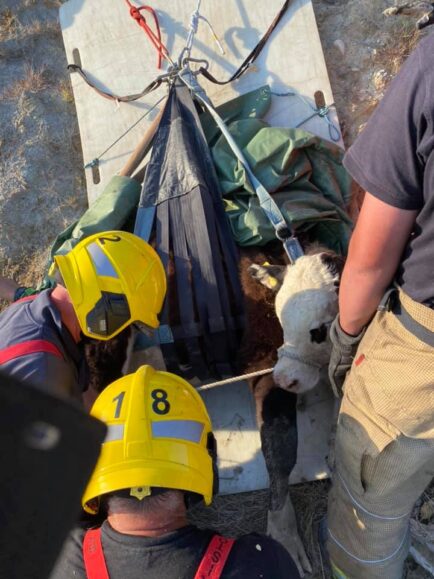 CHARMOUTH fire crew were called to rescue a calf which had fallen 80 feet over the cliff near Golden Cap yesterday (Saturday).

The crew’s off-road vehicle and supervisory officer were mobilised to asses the incident and, shortly after arriving, the animal rescue team from Poole fire station and Charmouth’s main pumping appliance were called to help rescue the female calf.

The job was a long and methodical rescue, made more challenging by the hot weather and location. After a number of hours the calf was sedated and hoisted to the top using a very intricate system of rope rescue equipment.

She was then reunited with her mum and given another injection to counteract the sedation.

Apart from a few scratches on her nose from trying to evade capture she is was good shape.

Car crashes into side of house

LYME Regis fire crew were called out yesterday (Tuesday) as a car crashed into the side of a house. […]

THE Mayor of Lyme Regis has called for a more visible police presence in the town after a several concerning incidents.  […]