OWNERS of The Fernhill Hotel, between Lyme Regis and Charmouth, are planning to remove the dilapidated mini golf course from their grounds after more than 30 years.

When Rob and Jo Illingworth took over the hotel 11 years ago, one of the first things on their ‘to do’ list was to get rid of the golf course, but legal complications over the site meant they had to put their plans on hold.

These issues have now been resolved, and they plan to start work removing the course over the next few weeks. The site will be simply landscaped for the time being, but Mrs Illingworth says they have lots of ideas of how it could be used in the future, and would also welcome ideas from their guests and customers.

In recent years the hotel has become recognisable for the mini golf course – which can be clearly seen from the road – but the owners hope to transform the site to better reflect the elegant hotel. 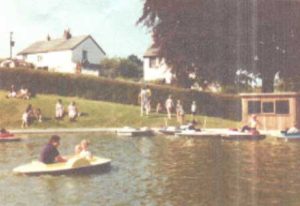 Before becoming a mini golf course, the site was used as a boating lake, popular with guests during the 1970s (pictured left), and before that was a kitchen garden.

The building itself – first opening as an hotel in 1950 – has a long and interesting history. The earliest section of the house dates from 1845, but the land itself can be traced back to the 13th century when it was owned by the Monks of Forde Abbey, as part of the land known as Langmoor, and in documents dated 1295 referred to as the boundary of the new borough of Charmouth, created by the Abbot of Forde.

The land on which Fernhill was built was bequeathed to the Ecclesiastical Commissioners to form a trust for a local charity supporting the poor. By a deed dated August 22 1837, certain trustees were given responsibility for the land, so the property was not sold, but passed from one tenant to another.

The wealthy heiress Ellen Maryatt was the tenant who went to the considerable expense of erecting a substantial house on the land, then aged only 30. It was one of a number of villas to be built in Charmouth at the beginning of the 19th century when, alongside Lyme Regis, it a became very fashionable resort.

It was later occupied by James Harrison, who added a billiard room and two bedrooms above it. Just five years after moving to the area, he discovered the earliest british dinosaur at Charmouth, named after him by Sir Richard Owen – ‘Scelidosaurus Harrisoni’.

In September 1855, Fernhill was put up for auction and soon after Miss Maryatt is shown to be living there again. She opened a small school at Fernhill and one of her pupils was Annie Besant, one of the most remarkable British women of the late 19th and early 20th centuries. A gifted public speaker and prolific writer, she campaigned for free thought, birth control, improved education and women’s rights.

Miss Maryatt’s brother, Captain Frederick Maryatt was very famous in his day, retiring from the Navy at the age of 38, he wrote a series of adventure novels, and children’s novels.

Other occupants have included Captain Campbell Munro, second son of Sir Thomas Munro, an Anglo-Indian soldier of some distinction who became Governor of Madras in 1820, who built the nursery wing.

LYME Regis had two winners at the South West Tourism Awards this week.
[…]

LYME Regis Town Council has agreed to spend up to £21,000 of unplanned expenditure in preparation for an expected influx of visitors when lockdown restrictions are eased. […]