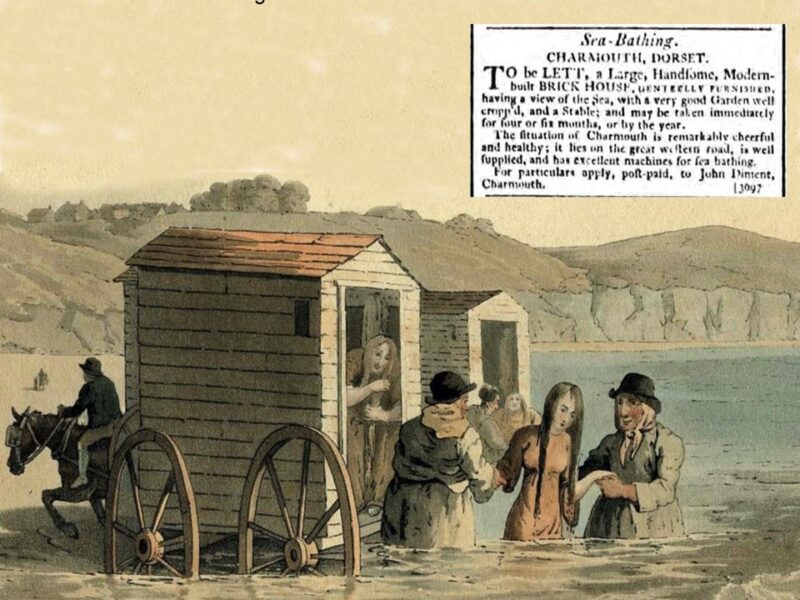 CHARMOUTH Local History Society will present illustrated talk ‘Charmouth Beach – Scenes From Its Past’, looking back at how the village has changed over the centuries.

Charmouth owes its existence to its proximity to the sea and the river Char, from which it gets its name, although much altered from its original of Cerne mouth.

The talk, presented by Neil Mattingly, will cover its early history  stretching back nearly two thousand years  on the Roman Road in the first part and then as a popular resort in the second part.

At the time of the Domesday in 1085, Charmouth was a small settlement producing salt by boiling sea water in large metal basins and collecting the residue.

Robert of Mortian, in Normandy, the half brother of William the Conqueror, owned the village at the time of the Norman invasion.

He is shown on the Bayeaux Tapestry to the right of William.

Charmouth was one of 71 manors that he was given, which also included Catherston and Wootton Fitzpaine.

After his death in 1091, another French nobleman, William de Estre, was shown as Lord of the Manor.

With its closeness to Lyme Regis, Charmouth was also able to benefit from the boom in visitors taking the waters for their health and had its own bathing machines, which were very popular as a way of bathing in the sea without being seen.

Wagons, called bathing machines, would be drawn out into the water by sturdy women, who might then assist the bathers down into the water where you could paddle about or swim in relative privacy, shielded from view of the shore.

The talk will be held on Friday, September 17 at Charmouth Village Hall in Wesley Close, starting at 7pm. Tickets are free for society members or £4 for non-members, including refreshments.

The Duke of Monmouth – Part II

THE Monmouth-led rebellion was a result of anti-Catholic feeling in the western counties, with Monmouth’s aim to depose the Catholic-minded James II. The Duke promised that, when King, he would defend the country against popery, tyranny and oppression. […]

RNLI calls for visitors to respect the water over Easter holidays

AS the school holidays approach, the RNLI in the South West is calling on people visiting the coast this Easter to respect the water and remember sea temperatures are still very cold. […]

JUST three years after the Battle of Hastings when William the Conqueror invaded England and claimed the English throne, a Lyme merchant ship set out on a voyage to the city of York. […]