THE children from Charmouth Primary School enjoyed an exciting and nerve wracking day at the national football finals on Saturday.

Playing at Coventry’s Ricoh Arena, the children did the school and the area proud.

As Dorset champions in the small schools category, Charmouth went to Bristol for the south west finals and were one of two teams to qualify for the nationals from the nine counties which were represented. And so, on Saturday there were two leagues of four and Charmouth were first off against Cambridgeshire representing the south east. They won the game 2-0 with goals from captain Mattie Loader and from George Chapman.

Next up was the Midlands and having gone a goal down, Charmouth came back to draw with another well-taken goal from George Chapman.

Their league was very tight and going into their last match, Charmouth needed a draw to qualify for the semis and Cheshire, from the North, needed a win to qualify. Inspired by Djibril Cisse’s (ex-Liverpool) son, the North went into a 1-0 lead and with two minutes to go, Charmouth looked as though they were heading home. However, a well-taken goal by Theo Whitely along with a fine save by Adam Rowe in the dying seconds meant that Charmouth topped their group which was a fantastic achievement. 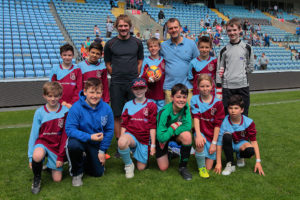 In the semi-final against Hampshire, the other team representing the south west, Charmouth went behind to an early goal and despite hitting the post and forcing a very good save from their keeper, Charmouth could not find a way back in to the game, exiting to the eventual winners. This ended a 37- match unbeaten run for the school and, at the end, each of the children from Charmouth wished Hampshire well for the final.

“We had a fabulous day and one I am sure that the children will remember throughout their lives. I am coming to the end of my role and I’d like to thank the school for the chance that we have had of working with the children over the past five years. It has been an absolute privilege for the three of us”.

LYME Regis 1st team clinched fifth place in the Devon & Exeter league Premier division  with a relaxed 3-1 victory over Feniton in their last match of the season at the Davey Fort yesterday (Monday). […]

VAR is making a farce of our beautiful game

It’s not coming home – yet!

THERE was only a handful of us who could remember seeing England play in a World Cup final. It was, of course, 1966 when a Geoff Hurst hat-trick delivered the Jules Rimet trophy to these […]