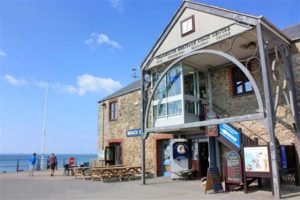 CHARMOUTH Heritage Coast Centre has received an award from the Royal Geographical Society.

The centre has been given the award for facilitating fieldwork and encouraging scientific and environmental engagement within the community.

The accolade acknowledges the centre’s completion of objectives set out in its constitution, focussing on educating the public in geology, palaeontology, geomorphology and natural history of the coast as well as maintaining the centre.

The centre has thanked Professor Jim Rose for the nomination. Senior warden Alison Ferris will visit the Royal Geographical Society in London later in the year to collect the award.

The hosts annual awards which recognise people or organisations for their outstanding contributions to geographical research, fieldwork and teaching, and public engagement.

THE annual Lyme Regis Fossil Festival has been deemed a resounding success after crowds of thousands descended onto the town over the weekend. […]

Name Fossil Festival’s new mascot to win £100 worth of LEGO!

IF you go down to The Hub today, you’re sure of a huge surprise! […]