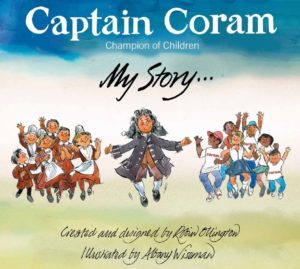 CORAM, the UK’s first children’s charity, has published a new book telling the story of its remarkable founder Thomas Coram, who grew up in Lyme Regis, celebrating the 350th anniversary of his birth.

‘Captain Coram: Champion for Children’ has been created through the support of a crowdfunding campaign, and Coram is aiming to send a free copy to every school in the UK, so that every child can discover the origin of children’s rights and the story of the visionary that made it possible.

Shocked at the sight of abandoned babies in the streets of London in the early 18th century, Thomas Coram campaigned tirelessly for 17 years to establish his charity, then known as the Foundling Hospital, the first home for babies whose mothers were unable to care for them.

Thomas Coram, born in Lyme Regis in 1668, continued to campaign throughout his lifetime, championing the welfare, education and rights of vulnerable children. His philosophy lives on through his charity known today simply as Coram, as it continues to help vulnerable children and young people across the UK.

His association with Lyme Regis is acknowledged in the name of Coram Tower on Sidmouth Road, Coram Court and Coram Manor, and Coram Avenue.

The book, aimed at 7 to 11 year olds, is created and designed by Robin Ollington and illustrated with original watercolour drawings by Albany Wiseman. Robin and Albany have worked in partnership for over 50 years, creating a number of children’s books.

Actor and long-term Coram supporter Peter Capaldi writes in the book’s foreword that “our hope is that by sharing in this story, you will see that when you fight for what is right, true and lasting change can happen”.

Dr Carol Homden CBE, CEO of Coram, said: “We are delighted to mark Thomas Coram’s 350th birthday with the publication of our new book, celebrating his remarkable achievements.

“In founding his charity, Thomas Coram changed forever how children are treated in this country and around the world. Yet his story remains little known.

“We want to change that, giving every child the chance to learn about their rights and welfare, and see how a man from humble beginnings created a lasting legacy as relevant now as it was three centuries ago.”

Through its crowdfunding campaign, Coram has raised enough so far to send a free copy of the book to every school across London, and the campaign continues to enable the charity to reach schools in the rest of the UK.

Find out more at justgiving.com/campaigns/charity/coram/corambook.

‘Captain Coram: Champion for Children’ is also now available for purchase, at £6.99 in the CoramBAAF bookshop at www.corambaaf.org.uk/books/captain-coram-champion-children

MORE than 270 reconditioned laptops and 30 mobile phones have been delivered to children across Dorset to help them with online learning. […]

THE multi-award-winning folk band Show of Hands will be playing in Thorncombe on Saturday, June 16 to raise funds for the village’s sports and social club.  […]