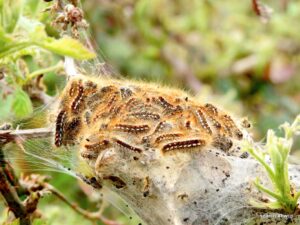 DORSET residents are advised to avoid brown-tail moth caterpillars on shrubs and bushes while gardening or exercising, as they can cause skin irritations and breathing difficulties.

Gardeners and those enjoying outdoor exercise may have noticed large webs on shrubs and bushes. These webs are where caterpillars that have been overwintering and large numbers of caterpillars are emerging from these cocoons and feasting on surrounding vegetation.

These could be brown-tail moth caterpillars, which have hairs which are an irritant to human skin, so they should not be handled. In some severe cases, they can cause breathing difficulties.

There are other caterpillars which make webs like this and identification can only be confirmed once the caterpillars emerge. The brown-tail caterpillars are small brown hairy caterpillars with two bright yellow/orange dots in line on their back.

Cllr Ray Bryan, Dorset Council portfolio holder for Highways, Travel and Environment, said: “Our advice is to avoid brown tail moth caterpillars, which emerge every spring, rather than try to destroy them.

“Dorset Council treat infestations on rights of way and council-owned land by managing the vegetation or with chemical treatment, where appropriate. If you have concerns about an infestation on your own property, then specialist companies can be employed.

“We work alongside our colleagues in the town and parish councils, so they may also take relevant control measures.”

If you notice them during your daily exercise time, don’t panic. Just leave them alone and try to stay away from areas where there are lots of them. The caterpillars are generally more common in May and June.

If you get the rash, which is often on the hands, arms and neck, apply antihistamine cream or calamine lotion. Symptoms should subside after a few hours, but seek medical help if you are unsure, or the reaction doesn’t lessen.

If you see the caterpillars within your home or in the garden, put on some vinyl or rubber gloves, pick them up and drop them in a bucket of soapy and salty water.

During the winter steps can be taken to reduce the numbers within people’s gardens (October to January). Again, using gloves, remove the nests and destroy by drowning.

Burning off the vegetation and nests now will make the problem worse, as the hairs of the caterpillars will become airborne, so do not do this. Also, Dorset and Wiltshire Fire Service are asking the public not to have bonfires during the coronavirus pandemic.

The caterpillars have a ferocious appetite so if there are plants in the garden that are affected, the Royal Horticultural Society has some advice at www.rhs.org.uk/advice/profile?pid=896

A FLOWER grown in Rousdon has received a Royal Horticultural Society accolade. […]

LETTER: Why single out the seagull?

FIRSTLY, I would like to congratulate LymeOnline for being the brightest, most cheerful local paper that I have ever come across (I am, in fact, 86 years of age, so that is a lot of local papers!). […]

Battling it out for the best birds!

THIS time of year our birds and animals are battling each other for the best partner and the best place to build nests for babies. […]