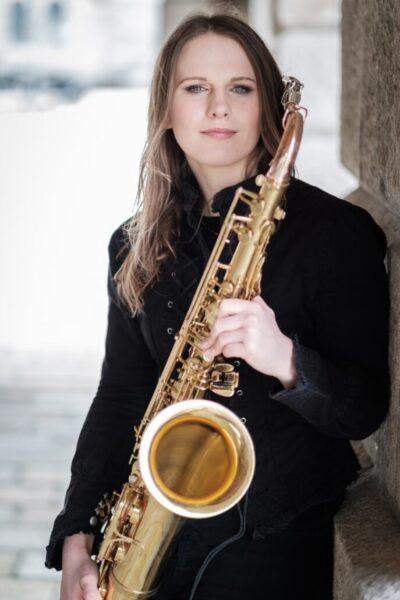 SAXOPHONIST Sonny Rollins is widely recognised as one of the most important and influential jazz musicians.

To mark 65 years since the release of his two best known albums, ‘Saxophone Colossus’ and ‘Tenor Madness’, Jade Gall and Philip Clouts will be playing his compositions, including the iconic jazz calypso ‘St Thomas’, and ‘Alfie’s Theme’ from the soundtrack of the classic film ‘Alfie’, starring Michael Caine.

Sonny Rollins played with jazz greats Miles Davis and Thelonious Monk early in his career, and soon afterwards released a series of landmark recordings under his own name.

In the 1950s he was widely regarded as the most talented and innovative tenor saxophonist in jazz.

Nevertheless, he withdrew from public performance for two years around 1960-during this period his habit of practising on the Williamsburg Bridge in New York became legendary.

In 1965 Rollins wrote the film score for ‘Alfie’, and in the 1970s he adopted a more funky approach to his music, as well as including unusual instruments such as the bagpipes in some of his work.

He has won three Grammy awards, and was presented with the National Medal of Arts by President Barack Obama.

Jade Gall is a classically trained saxophonist who has studied both at Dartington and the Royal Welsh College of Music.

She has also rapidly become the go-to choice for jazz, swing, soul and ska bands throughout Devon, including ‘The Simmertones’ who have had many plays on BBC Radio 2 with their single ‘Perhaps’ which features Doris Day.

In addition to playing Sonny Rollins’ own compositions Jade Gall and pianist Philip Clouts will be playing jazz tunes such as ‘Summertime’ and ‘God Bless the Child’ that Rollins has played so creatively and convincingly in his recordings.

This will be the latest in the Jazz in the Bar series of events staged at the Marine Theatre in Lyme Regis on Sunday, October 3 from 8pm.

THE popular Budapest Café Orchestra is returning to Dorset for five dates this month.  […]

THE curtain has finally fallen for Lyme Regis Musical Theatre after 100 years of entertaining local audiences. […]

‘Blues royalty’ to star at the Marine Theatre

MAGGIE Bell and Dave Kelly, a blues duo who renewed their partnership in 2016 after a brief hiatus, are on tour playing at a select few venues and festivals in the UK and Canada, including the Marine Theatre in Lyme Regis. […]