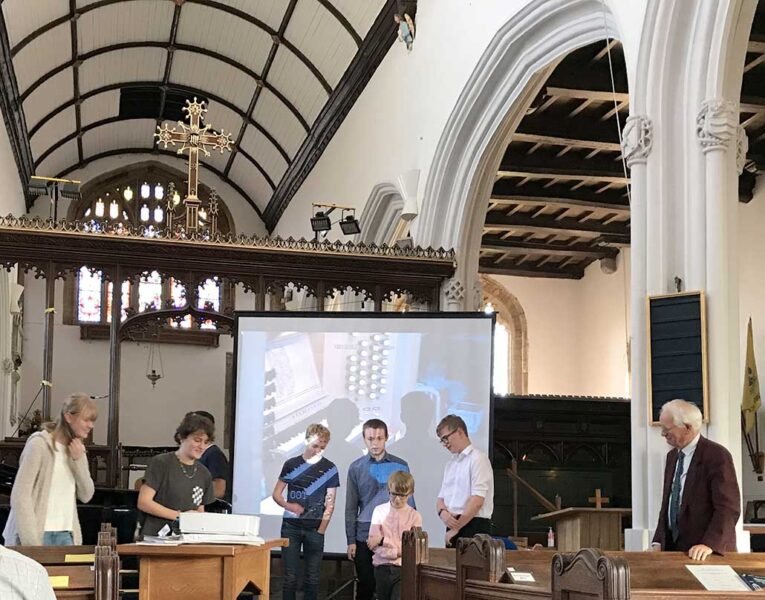 PipeUp is a scheme administered through the Diocese of Salisbury to subsidise organ teaching across a large geographical area, spanning from Lyme Regis in the south of the diocese almost to Swindon in the north.

There are several teachers in the scheme and Dr Godfrey is the teacher within this area.

The time and enthusiasm put into teaching these students by Dr Godfrey shone through each performance.

All seven students have worked hard over the years to reach their individual standard; with a number of the students having achieved such a high level that they play the organ during the Sunday Church Services in their local churches.

The piece the students performed all form part of their upcoming exam pieces at the beginning of November.

Ross Long, aged 17, one of the more senior students and the first to perform, had worked so hard prior to the concert that his shoes had fallen apart.

Unfortunately for Ross, Dr Godfrey had already kindly lent his shoes to Billy, as Billy’s newly bought shoes were too big. As a result of this, Ross had to make do with gluing his soles back and hoping for the best!

He played extremely well during his performance of Fantasia in G minor BWV 542, by J.S. Bach. This is a very solemn piece, probably written after Bach discovered that his first wife had died whilst he was absent for two months accompanying his employer, Prince Leopold.

Ezra Jefferies, aged 10, performed two attractive pieces; the first Diapason Piece by S. Wesley, who is known as the English Mozart, and the second piece Withycombe by Philip Moore, who was the organist of York Minster until 2008.

Ezra is ready to play advanced organ music but is still too short to reach the pedals properly. He did, however, manage to reach two pedal notes in the Wesley piece.

Maja Palka, aged 14, having already played during the church service that morning, performed the charming piece Der Tag ist hin by Oley. This piece shows off a solo on a particularly beautiful foreign sound in the Skrabl organ.

Oriel Chapman, also aged 14, is another pupil already playing regularly for church services. She is a very talented musician who plays both the piano and violin as well.

She performed two pieces; the first, Prelude on an old Irish Hymn by C.V. Stanford, and the second Chorale Variations on O Filii by J. Demessieux. These pieces show off many different sounds in the organ.

Variations on Easter Hymn O sons and daughters is remarkable and technically demanding for the player.

The concert was beautifully put together with an interlude from Ravel’s Mother Goose suite (piano duet – Oriel Chapman and Richard Godfrey), Beauty and the Beast and The Enchanted Garden.

Billy Stuttaford, aged 13, having just arrived back from a family wedding in Hampshire, followed the piano interlude by performing Pasticcio by J. Langlais. This is a quirky modern piece composed by a blind French organist.

The music calls for sudden changes of key and dynamics, needing imagination and stamina in the player.

The concert came to a close with William Bishop, aged 17, performing Andante (Sonata 4) by Mendelssohn and Fughetta no 7 by J. Rheinberger.

William is another accomplished church organist, currently assistant at St Peter’s in Dorchester and applying for cathedral scholarship in his gap year. He is about to take Grade 8 at the beginning of November.

Mendelssohn a beautiful quiet piece with rapid running accompaniment to gentle tune, and Rheinburger a majestic fugue leading to full organ at end.

It was a fantastic concert in which the young students were given the opportunity to demonstrate what they were each capable of playing.

Dr Godfrey has done an amazing job in inspiring and teaching these young people so well. He said: “I decided to teach the organ after retiring from a hospital consultancy and I find it very fulfilling.

“This is especially the case when students make rapid strides and begin to inject their own innate musicianship into performances such as we heard in the concert.”

Our extended thanks go to Dr Godfrey and his wife Jane for all their support. The students will be performing a very similar programme at 3pm, on Saturday, November 6 in St Swithun’s Church, Allington, Bridport.

LYME Bay Chorale have chosen a selection of music with a nautical theme for their spring concert this year. […]

MY fondness for the Marine Theatre stems from the fact that I did most of my courting in the old place where I fell in love and had my heart broken – virtually every Saturday night! […]

FOLLOWING a popular Facebook competition, South West band Square One has won a headline slot at the regular Sunday Sessions at the Marine Theatre in Lyme Regis. […]