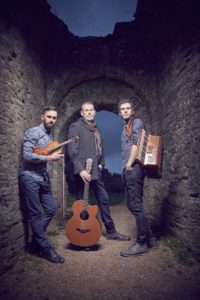 ‘ALAW’ is Welsh for melody and it is a love of melody that is at the heart of this outstanding trio, who will be visiting Dorset during January.

Drawing on a great wealth of musical experiences, ALAW will take their audiences on a musical journey, with a tune brought back from a tour in Bulgaria or collaboration in India; at the heart of their set is a passion for the old tunes of Wales.

From the elegant to the virtuoso, the three musicians play with an empathy that comes from many years of collaboration.

Dylan Fowler has a developed a reputation as an international solo guitarist. Oliver Wilson-Dickson plays with, amongst others, The Devil’s Violin and The Ian McMillan Orchestra. Described by R2 magazine as “an expressive and exceptional fiddler”, he also regularly collaborates with storyteller Daniel Morden, with whom he appeared for four consecutive years at the National Theatre.

Jamie Smith is a folk musician and one of the UK’s finest accordionists, fronting the international award-winning Celtic band Jamie Smith’s Mabon.

In August 2018, ALAW collaborated with the BBC Concert Orchestra for a televised Prom at The Royal Albert Hall in a performance described on BBC Radio 2 as “show-Stopping” and in The Times as “a sparkling collision of Celtic traditions”.

From stirring songs to driving jigs, ALAW communicate their music with relaxed humour and a genuine affection that is truly infectious. Expect an evening of joyful and life affirming music to start the new Artsreach season.

The South to visit Marine on UK tour

TO celebrate their 10th anniversary and 30 years since The Beautiful South released ‘Song For Whoever’, The South are back this spring with a UK tour playing shows up and down the whole of the country. […]

Lyme Regis organist to give recital with difference

ACCOMPLISHED Lyme Regis musician Alex Davies will be giving an organ recital with a difference on Monday, February 12th at St Michael’s Church. […]