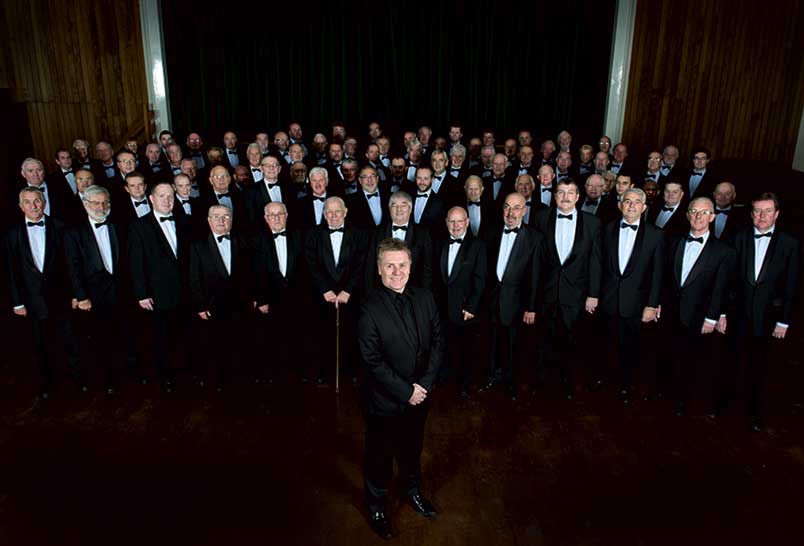 THE Treorchy Male Voice Choir, recognised as one of the greatest choral ensembles of all time, is returning to Lyme Regis.

The choir has appeared in the Lyme Regis areas on several occasions and will be giving a concert at St Michael’s Parish Church on Saturday, September 10, starting at 7pm.

All proceeds from the concert will go to the Lyme Regis branch of Cancer Research UK, which since forming in 2008 has raised about £180,000 for the national charity.

Choirs have flourished in the Rhondda Valley for more than 150 years and nowhere has this been better represented than in Treorchy.

One of its first male choirs was formed in the inauspicious surroundings of the Red Cow Hotel in the summer of 1883 and developed into a National Eisteddfod winner, culminating in a Royal Command Performance for Queen Victoria at Windsor Castle.

Sadly, the choir later disbanded after suffering from the effects of massive economic depression and two World Wars, but from those ashes arose a male voice choir that would become a household name.

The present Treorchy Male Choir was reformed on October 16 1946 under the baton of the immortal John Haydn Davies. This remarkable man led them on “a realm of gold” in the space of 20 years, transforming the raw musical recruits into an international institution.

They scaled the peaks of musical distinction in the eisteddfod field by gaining a record eight national wins (six consecutively), making a total of 22 first prizes out of twenty seven entries.

The unique ‘Treorchy Sound’ was heard worldwide as they made regular radio broadcasts, television appearances, commercial recordings, two feature films and an overseas tour to Switzerland where they sang for 85,000 people in the Mayor’s Parade in Zurich.

Treorchy was to become the first male choir to venture into the uncharted territory of popular music and, subsequently, the choir has made almost 60 commercial recordings, making it probably the most recorded in the world.

In more recent years their radical attitude to music making included a ground-breaking album of music by Freddie Mercury and Queen, two recordings of music by Bob Marley and in complete contrast they became the first British choir to perform Sibelius’ Kullervo Symphony in Finnish.

The choir has also shared the stage with some of the world’s greatest entertainers during its long and illustrious history.

Television programmes with Sir Tom Jones, Ella Fitzgerald, Julie Andrews, Sir Harry Secombe and Burt Bacharach were only the beginning of their long association with major celebrities and now their list of performances reads more like a ‘who’s who’ of international stars.

Overseas tours have played an important role in the ongoing success story of Treorchy.

Since the early 1980s the choir has undertaken an enviable number of overseas tours beginning with two successful visits to Canada and a performance at the Strasbourg Cathedral for its congregation of almost 6,000 people.

A series of four successful tours of the USA followed, with visits to the White House and performances in San Francisco, Denver, Seattle and the Mid West.

Treorchy has also enjoyed an enduring love affair with Australia, becoming the first Welsh choir to appear at the Sydney Opera House in 1986.

The choir has made three further visits ‘Down Under’, appearing in Brisbane, Perth, Adelaide, and Melbourne while making two triumphant returns to the Opera House in Sydney.

During their visit in 2009 they visited New Zealand with concerts in Auckland, Christchurch and Wellington.

In 2012 members of the choir sang at the prestigious World Money Fair in Berlin at the invitation of the Royal Mint.

Closer to home, the choir has become a regular entertainer on the hallowed turf of the Millennium Stadium for various rugby international games and in 2009 they opened the new Cardiff City Stadium.

One of their most prestigious engagements came on St David’s Day 2013 when they received a standing ovation at the Hotel de Paris in Monte Carlo before a royal audience including Their Serene Highnesses Prince Albert II and Princess Charlene of Monaco along with special guest Dame Shirley Bassey.

Such was the success of the visit that the choir returned to Monaco in March 2014 and once again performed at the Hotel de Paris and in the private apartments of the Prince at his Palace.

The choir embarked on a weekend concert tour of Guernsey in 2015 thanks to the financial support of Specsavers founder Dame Mary Perkins. A year later and they were honoured to perform in the Centenary Commemorations of the Battle of Mametz Wood.

The Treorchy Male Choir, a registered charity devoted to raising tens of thousands of pounds per year for worthwhile causes, remains bound together and united in the common purpose of the enjoyment of music making and of giving pleasure to others.

After their concert in Lyme Regis, the choir will be visiting The Talbot Arms in Uplyme for refreshments, as landlady Wendy Gardner is originally from Treorchy and knows the choir well.

LymeOnline is offering readers the opportunity to win four tickets to the concert, valued at a total of £88. All you have to do is visit the Treorchy Male Voice Choir website treorchymalechoir.com to find the answers to our four questions below. Some answers are also given in the article above.

You can then send your answers to edit@lyme-online.co.uk with the subject line ‘Treochy Choir’ by the closing date of Friday, August 12 for your chance to win four tickets. Please include your name and contact number on the email.

MORE than £1million in National Lottery funding has been awarded to 34 community projects in Dorset, ranging from a therapeutic garden for the community to art and craft activities for people with mental health issues. […]

RESIDENTS and visitors celebrated their favourite seaside resort, as the first ‘I Love Lyme Day’ was held last Thursday. […]

A SELL-OUT 120 people attended this year’s Rotary Club of Lyme Regis soup and ploughman’s lunch at the Alexandra Hotel. […]