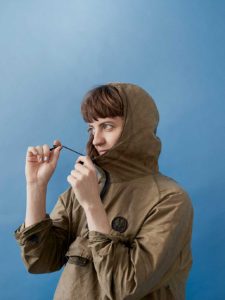 ROZI Plain will be visiting the South West for two special concerts this March, following the release of her latest album ‘What A Boost’, which has received considerable airplay on BBC Radio 6Music.

The UK tour will include appearances two more unusual venues – the Marine Theatre in Lyme Regis and St Mary’s Church in Totnes.

Plain emerged with her solo debut, ‘Inside Over Here’ (2008) and quickly became a favourite on BBC Radio 6Music.

Praised for her intricate and quietly off-centre approach, she is best known for her deliciously sad works, full of heart-wrenching harmonies, punctuated with unexpected instrumental flourishes.

Plain has been making music since her brother taught her a few guitar chords at the age of 13. She later moved to Bristol and began collaborating with long-term friends Rachael Dadd and Kate Stables (Rozi now plays bass in This Is The Kit).

It was in Bristol that Plain made her first two albums, ‘Inside Over Here’ and ‘Joined Sometimes Unjoined’ (2012).

Now, almost permanently on tour, Plain takes her joyous set on the road around Europe, the UK, and the USA. Having spent a year touring the world playing bass in This Is The Kit, Plain has tweaked and refined her set so that ‘What A Boost’ becomes not a record about the experience of life on the road but one that is undoubtedly, and beautifully, shaped by it.

‘What A Boost’ nurtures its homely roots and blooms into a textural, repetitive, and propulsive piece that plays like a soundtrack to the world flying past a window. The shapes, colours, sights, and sounds of the musical journey flicker past as snapshots and our only job is to simply sit back and soak in as much of it as we can.

The Marine is a place for smiling, joy and good times

ACCORDING to my Mum, when Dr Fernandez delivered me in Lyme’s old cottage hospital on Pound Road the very first thing that I did in this world was to wee in a great arc all over the midwife. […]

The Stones to play Lyme Regis

The UK’s number one and most authentic tribute to The Rolling Stones is bringing all the hits to the stage of the Marine Theatre in Lyme Regis, from ‘Satisfaction’ to ‘Brown Sugar’. […]

THE South Wessex Organ Society (SWOS) will hold its first exclusive event this spring when members and their guests gather for the president’s reception. […]