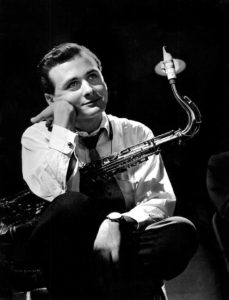 AMERICAN jazz saxophonist Stan Getz was known as ‘The Sound’ because of his warm, lyrical tone, his prime influence being the wispy, mellow timbre of his idol, Lester Young.

Getz won many Grammy awards in his lifetime, including one for his performance of bossa nova hit ‘Desafinado’, which is one of the tunes you will hear on Sunday, March 24 at the Marine Theatre’s latest Jazz in the Bar offering with musician Terry Quinney.

A giant of the jazz world, Getz played with the best of his generation, and this evening you will hear music he played with the likes of Oscar Peterson, Bill Evans and Gerry Mulligan.

Saxophonist and composer Terry Quinney has quickly established himself on the British jazz scene since arriving here a few years ago from Canada. As co-leader of the The Sound Of Blue Note band, he has performed with UK jazz icons such as Nigel Price, Ian Shaw and Alan Barnes.

Terry has played at the renowned Pizza Express Jazz Club in Soho, the National Theatre, Johnny Dankworth’s venue the Stables, and numerous jazz clubs in the UK, as has Philip Clouts, who will be accompanying him at the piano.

Jazz in the Bar will be held at the Marine Theatre in Lyme Regis on Sunday, March 24 with the bar opening at 7pm for an 8pm start.

Tickets cost £8 in advance or £12 on the door. To book, call 01297 442138 or visit www.marinetheatre.com. Please note, this event is upstairs and there will be limited unreserved seating.

Celebrate the summer with Artsreach!

THIS summer, Artsreach continues to bring professional performances to rural venues right across Dorset, with the launch of a new and exciting summer programme. […]

JAZZ Jurassica, Lyme Regis’ jazz and blues festival, is braced this year for a ‘Skanda’ invasion. […]