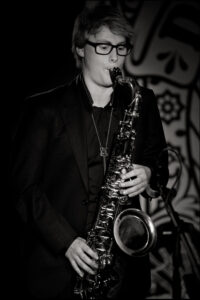 A TRIBUTE to Art Pepper, recognised as one of the major jazz stars to emerge out of the West Coast jazz scene of the 1950s, will be held at the Marine Theatre in Lyme Regis on Sunday, February 13.

Continuing the Marine’s regular Jazz in the Bar nights, saxophonist Will Paley will be presenting Art Pepper’s music accompanied by Philip Clouts at the piano.

Art Pepper was born in Gardena, California. A gifted soloist by his teens, he initially drew attention touring as a member Stan Kenton’s band before launching his solo career.

Along with artists like Chet Baker, Gerry Mulligan and Lee Konitz, Pepper became synonymous – perhaps due more to geography than playing style – with the laid-back West Coast jazz sound.

After entering the Synanon drug rehabilitation program in the late 60s, Pepper managed to resurrect his career.

Working alongside his wife and manager Laurie Pepper, he recorded a series of comeback albums including 1975’s ‘Living Legend’ and 1980’s ‘Straight Life’, which found him embracing a more muscular sound influenced by John Coltrane.

Art Pepper had interesting reflections on playing jazz. In the sleeve notes to one of Pepper’s albums, Leonard Feather quoted him as saying:”The way a man walks, the way he talks, the timbre of his voice, the cadences of his speech, his little variations in phrasing and thought — all have so much to do with individuality.

“The same thing is true of a man’s playing in jazz… his tone, the way his sound moves, his feeling for time. That’s why jazz is consistently fascinating.

“You could ask six guys to play an identical solo, but when you heard the results, you’d hear six different solos.”

Will Paley is a highly sought after saxophonist based in Exeter. He performs regularly around the UK and has played at some of the country’s most prestigious venues including The Barbican Centre, The Vortex, The 100 Club, Ronnie Scotts, Westminster Abbey and 10 Downing Street.

Art Pepper was both a composer and a wonderful interpreter of jazz standards, so alongside his original tunes like ‘Chili Pepper’ expect to hear his versions of pieces like ‘Over the Rainbow’ and  ‘You’d Be So Nice to Come Home To’.

Doors open at 7pm for an 8pm start on Sunday, February 13. Tickets cost £10 in advance or £12 on the door, available at www.marinetheatre.com

A country knees-up to celebrate May Day

A TRADITIONAL country knees-up headlined by popular ceilidh band Red Shed will be held at the Marine Theatre in Lyme Regis over the May Day Bank Holiday weekend. […]

LYME Regis Musical Theatre left audiences with smiles on their faces this week, thanks to its production of the fun and frivolous Broadway hit ‘Hello, Dolly!’. […]