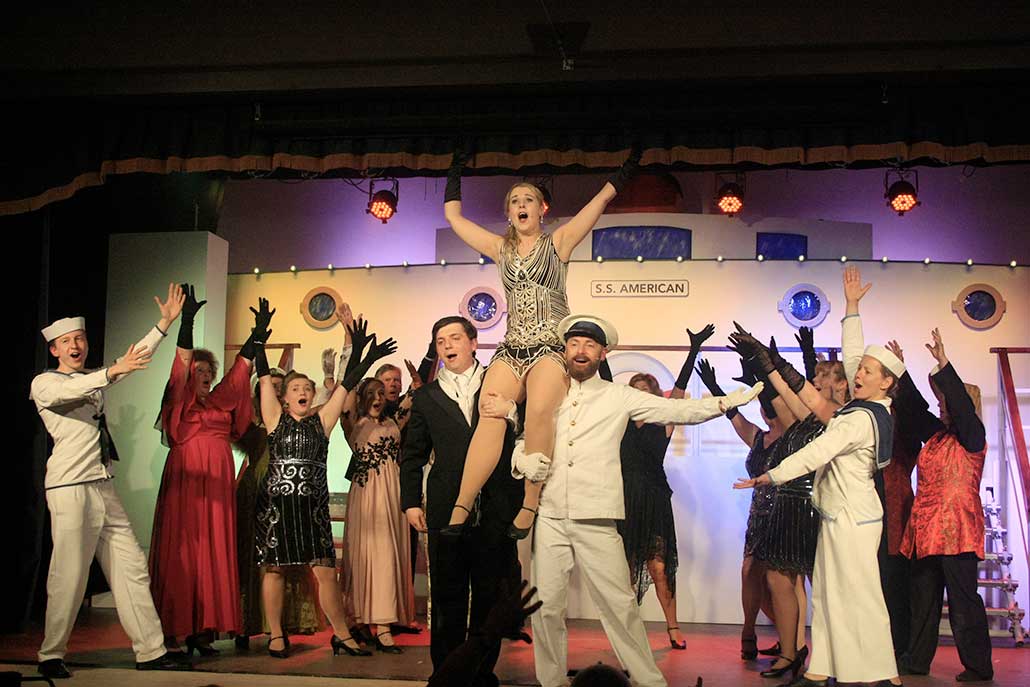 LYME Regis Musical Theatre won rave reviews from audiences as they set sail on the SS American for their recent production of Cole Porter’s classic ‘Anything Goes’.

The story followed the madcap antics of those aboard an ocean liner bound from New York to London in the 1930s, with several rising stars of the musical theatre group taking the leading roles.

Joe Binmore was cast as stoaway Billy Crocker, desperate to win the affection of heiress Hope Harcourt, played by Grace Herbert in her biggest role to date and who clearly has a great future on the local stage with a delightful singing voice.

The talented duo complimented each other with their strong singing voices, especially in duets ‘It’s Delovely’ and love song ‘All Through the Night’, while Tom Lowe had the audience in stitches as Hope’s rather clueless English fiance Sir Evelyn Oakleigh, stepping in late to the rehearsal schedule and learning the part in just six weeks.

But it was Silvey Webber who stole the show, oozing confidence and natural stage presence as Reno Sweeney, a nightclub singer accompanied on board by her backup group The Angels – Susie Gambie, Jasmine Hussey, Elaine Street and Nicole P. Ward, who did much to keep the momentum of the show moving.

Billy enlists the help of Reno to win Hope’s heart, and Reno herself unexpectedly falls for Sir Evelyn along the way.

Joined by Public Enemy #13 ‘Moonface’ Martin, played Ian Styles, who came to the stage fairly late in life, in his biggest and most successful role to date, and his enthusiastic moll Bonnie, played by Robin Braksted – another rising talent for the society – the gang get into all kinds of mischief on board the SS American, with Billy donning an increasingly ridiculous array of disguises to avoid being thrown into the brig.

The leading characters were backed up by an excellent supporting cast, including Brian Boyt who entertained as Elisha J. Whitney – getting more and more inebriated throughout the voyage – as well as Vanessa Loader as Hope’s easily-charmed mother, Scott Robson as the steward/purser, Brian Rattenbury as the ship’s captain, Pete Ward as the unfortunate Bishop Dobson and Sue Wiscombe and Val Cullimore as Chinese converts Ching and Ling.

With hits including ‘You’re The Top’ and ‘I Get a Kick Out of You’, ‘Anything Goes’ is widely regarded as some of Cole Porter’s best work and the ensemble did not disappoint in performing the popular tunes with gusto.

They were accompanied by the ‘Ship’s Band’, led by musical director Ian Crew, who went out with a bang giving his last performance with Lyme Regis Musical Theatre.

With plenty of impressive lifts and high kicks on the high seas, it was the dance numbers that really wowed the crowds.

In particular, the title song ‘Anything Goes’ was a feast for the eyes as well as the ears, and had the audience cheering for more as the show broke for the interval. Hats off to choreographer Rachel Worsley.

The ingenious set was also impressive and noted as one of the best by keen followers of amateur dramatic shows in the area, with credit going to the multi-talented Ian Styles, taking on the backstage task of set construction as well as entertaining on stage.

To celebrate the centenary, the society will be staging a concert version of ‘The Mikado’ – their very first show performed in 1921 – at the Marine Theatre on August 1 and 2 2020, as well as its annual spring production from May 12 to 16, which members have this week confirmed will be ‘Chicago’, a first for the society and a production that their talented young members will relish.

Among those to attend ‘Anything Goes’ were the outgoing mayor and consort, Michaela and Alan Ellis, and life member Nick Lawrence, last year’s national president of the National Operatic and Dramatic Association.

For more pictures from ‘Anything Goes’ visit the LymeOnline Photo Gallery

THE Marine Theatre in Lyme Regis will host Ivor Novello award-winning singer-songwriter Scott Matthews in one of its first events after reopening in May.  […]

THE LBJBs are headlining the third concert to be staged by Ottery Refugee Response Group, a voluntary community organisation in East Devon. […]

THE recently-launched community radio station, Lyme Bay Radio, is helping to spread joy across the local area as residents cope with the coronavirus epidemic.  […]