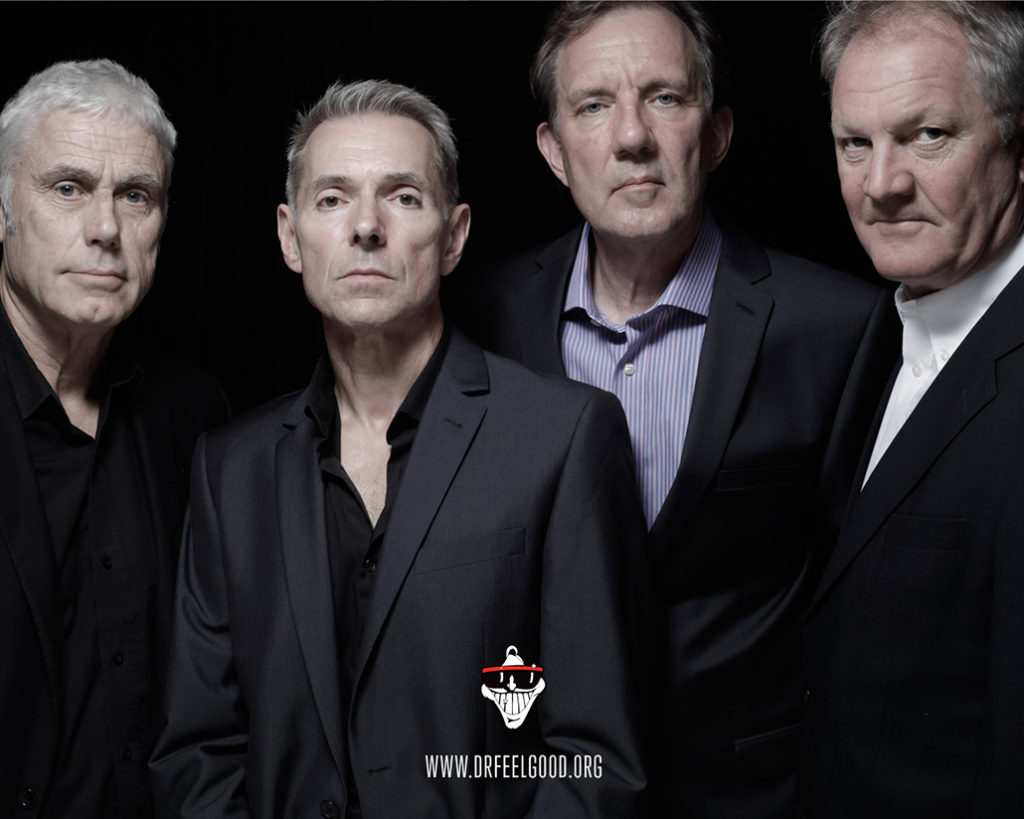 Over August 3, 4 and 5 Lyme will play host to one of its biggest ever weekends of live music.

The fun starts on Friday, August 3 with Britain’s best loved R&B band Dr Feelgood. Formed in 1971 on Canvey Island, Essex, they are known for songs such as She Does it Right, Roxette, and Milk and Alcohol, which reached the top ten. Dr Feelgood (pictured above) remains one of the most popular and exciting live rhythm and blues acts in the world.

Their energetic live performances secured them a following on the seventies London pub rock circuit. The raw and uncompromising style of their performance resulted in the album ‘Stupidity’ that immediately went to the number one position in the UK charts.

Dr Feelgood has also enjoyed global success with a string of hit singles including ‘Milk and Alcohol’, ‘Roxette’, ‘Back in the Night’, ‘Down at the Doctors’, ‘She Does it Right’, ‘Going Back Home’ and ‘See You Later Alligator’ – which gave the group their first gold record.

The current line up features the rhythm section Kevin Morris on drums and Phil Mitchell on bass, both 29 years in the band, and Steve Walwyn on guitar who has been with the band for 23 years. Vocalist Robert Kane, formerly of the Animals, is the most recent addition, joining in 1999 after the tragic death of Lee Brilleaux.

The band continues to tour extensively throughout the World and enjoy a loyal following at home and abroad.

Dr Feelgood will be supported by Mike Garry and local music duo Grace Gillan and Jake Miller. Mike’s work has been championed by Philip Glass, having worked with him since 2014 at concerts in the USA and Europe.

On Saturday, August 4, the multi-award-winning DJ Yoda will give a special warm-up gig ahead of his appearance at Bestival.

The hip-hop DJ and producer (pictured left) headlines festivals and clubs around the world. Working with classical composers to neuroscientists; brass bands to film directors; Dr Dre to Dame Evelyn Glennie; Banksy to Mark Ronson; BBC Radio 4 to the BFI, he reinvigorates DJing with humorous intent.

Tickets cost £15 in advance or £18 on the door with a 10 per cent discount for Theatre Friends.

Sunday, August 5 sees things calm down for a relaxed jazz concert overlooking Lyme Bay. Elaine Davies, star of the Algy Davies Quartet is celebrating the Great American Song Book at the latest in the Marine’s ‘Jazz in the Bar’ series.

Doors open at 7pm for an 8pm start and tickets cost £8 in advance or £12 on the door, with a 10 per cent discount for Theatre Friends. Please note, this event is upstairs and there is limited seating.

To book or for full details on all events, visit www.marinetheatre.com

LATIN band Orpheus promise to get everyone dancing when they perform at Marine Theatre in Lyme Regis this October. […]

All welcome to join B Sharp Busking Festival

ENJOY playing music and singing on the streets? Playing piano or drums on the seafront? Dancing on the Cobb? Watching live music from one of B Sharp’s numerous young bands? It’s all happening in Lyme Regis over the Spring Bank Holiday weekend. […]

The UK’s leading celebration of The Eagles swoop into Lyme

TALON has secured a following in their own right, despite being primarily a celebration of excellent band The Eagles. […]