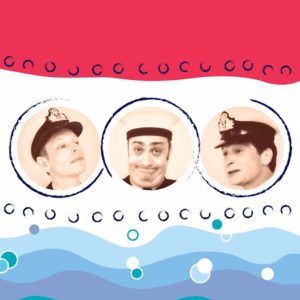 COUNTERACT the curse of Friday 13th this March by joining the Marine Theatre in Lyme Regis for a stage revival of the beloved radio series, ‘The Navy Lark’.

This special theatre production sees a cast of three bring to life a trio of classic episodes from the much loved radio series.

This homage to the original stars James Hurn, known for his portrayal of iconic characters Tony Hancock, Sid James, and Kenneth Williams in his hit one-man show ‘Hancock and Co’.

The trio is also made up of Richard Usher and Mark Earby, best known for ‘The Goon Show Tour’ and ‘The Lost Hancock’s Vacant Lot’.

‘The Navy Lark’ is presented in the style of a radio performance, in front of a live audience. It aims to bring to life the classic days of radio comedy with a night full of nostalgic belly laughs.

WITH more than 150 events annually – including cinema, concerts, plays, and screenings – a ticket to every show at the Marine Theatre in Lyme Regis for a year was always going to prove to be a very popular prize. […]

Outdoor performances return to the Marine

HAVING had its doors closed since the end of March due to the coronavirus pandemic, the Marine Theatre in Lyme Regis is looking forward to welcoming audiences again to a series of outside events this summer. […]

‘I’M Not Running’ is the seventeenth play by David Hare for the National Theatre, and will broadcast live to the Marine Theatre in Lyme Regis. […]

In his latest 'Flashbacks' blog, photographer Richard Austin shares a snap of Sir Ian Botham on one of his fundraising missions https://t.co/xIr1s8sAMu
View on Twitter
1
1