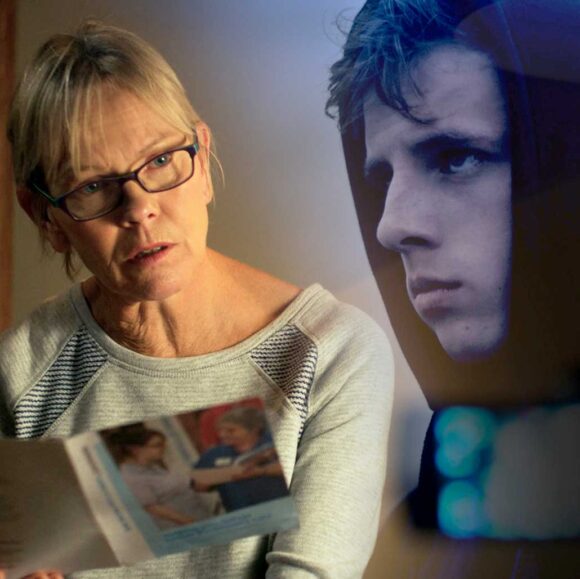 BRAVE, honest and humorous, ‘Kinetics’ was originally written as a stage play but, following national demand for it to tour and a subsequent fundraising campaign, it was turned in to a film which is now set for a one-off screening hosted by Artsreach this February.

Written by Dorset-based actor and writer Sue Wylie, and based on her own experiences of being diagnosed with Parkinson’s disease, ‘Kinetics’ charts the remarkable true story of two people, seemingly at polar opposites.

Rose is trying to come to terms with her own diagnosis, when an unlikely friendship springs up as parkour runner Lukas comes tumbling into her life.

Sue Wylie has performed in many national theatre and TV productions, but this inspiring project marked a new phase in her career.

She commented: “Shortly after my 50th birthday, I was diagnosed with Parkinson’s. After the initial shock I knew I wanted to write about it. As a professional actress I know how communication through a script is a powerful tool.

‘I was teaching drama at a college at the time and discovered a 16-year-old student in my tutor group was free running on the school roof! The exhilaration was his release and I was intrigued by the risks he took in his addiction to this extreme sport, known as parkour.

“How interesting to contrast that with a middle-aged woman whose world of movement is slowly becoming eroded. What if their paths should accidentally cross and an unlikely friendship form? I knew there was a play script in there and thus ‘Kinetics’ was born.”

Having been on two critically-acclaimed theatrical tours, including two sell-out performances with Artsreach, it was apparent that the story of ‘Kinetics’ had the power to provide catharsis and insight to those affected by Parkinson’s and the wider general public.

With demands to have the play staged coming from locations across the country, along with Sue’s internal desire to share the story as widely as possible, it became apparent that ‘Kinetics’ should be turned into a film.

Following an incredibly successful fundraising campaign, more than £30,000 was raised and ‘Kinetics’ the film was premiered in the spring of 2018, and returns this spring for one special screening in Wootton Fitzpaine, near Charmouth.

The screening will be held at the village hall on Friday, February 15, hosted by Dorset’s touring arts charity Artsreach. The screening at 7pm will be followed by a question and answer with writer Sue Wylie.

Further information and tickets are available at www.artsreach.co.uk or call 01297 560948.

Laura steals the show as lead in ‘Made in Dagenham’

I KNOW Dagenham. When I moved to London to run a group of newspapers in the East End, it was where I worked. […]

Is this the end for the TIC?

GREAT concern has been expressed in Lyme Regis this week over the future of the town’s award-winning Tourist Information Centre. […]

No two days are the same at the Marine

APRIL showers bring forth May flowers but ne’er cast a clout till May be out; in other words be prepared for all weathers, to be frozen when you walk to work and sweating buckets when it’s time to head home. The British weather, one of the most important topics of conversation and always keeping us on our toes. […]