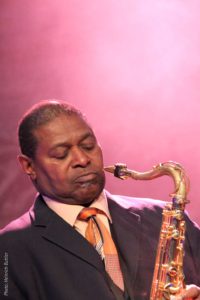 JAMES Morton, Bristol’s Ambassador for Music, will be joined by legendary saxophonist Pee Wee Ellis alongside a full band in a special concert of funk, soul, and jazz at the Marine Theatre in Lyme Regis this March.

James Morton, known as ‘the kid’ in jazz circles, is a long-standing member of hip-hop legends, The Herbaliser. He has developed an international career in jazz over the last 15 years.

The first appointed Bristol Ambassador for Music, Bristolian born-and-bred Morton has recently been commissioned by Canary Wharf, Chestochowa, and The Polish Ministry of Culture.

The newly-formed project, Craqsquad is a collaboration with multi-award-winning producer DJ Suv, and includes members of Massive Attack, The Herbaliser, and Roni Size Reprazent that drew crowds of thousands during the first performance in May 2018.

Morton’s unique lyrical and rhythmic style allows him to transcendently ‘speak’ to his audiences. His ability to musically convey powerful sense of emotions that connects people is what makes him such a special – and in demand – player.

‘Cold Sweat’, widely considered the first true funk record, was the fruit of Ellis’ collaboration, along with a string of JB’s hits for the next four years.

By 1970, Pee Wee Ellis moved to New York and was producing and directing for the likes of Brother Jack McDuff, Esther Phillips, and George Benson.

Whilst working in California in 1979, Ellis caught the ear of Van Morrison and thus began a five year spell as Morrison’s musical director and bandleader, arranging the horns on albums such as ‘Into the Music’ and ‘Common One’.

James Morton featuring Pee Wee Ellis will appear at the Marine Theatre on Saturday, March 14 with the bar opening at 7pm for an 8pm start.

A WEEKEND of free music, dancing and other events will bring the summer holidays to a close in Lyme Regis. […]

A trip back to the 90s with top Oasis tribute

THE Marine Theatre in Lyme Regis is going back to the 90s, with the UK’s most authentic tribute to Oasis, alongside 90s DJs. […]