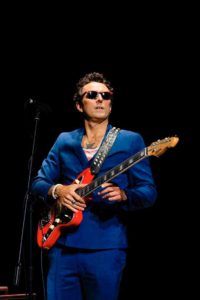 ‘THE Truth about Men’, written by Scott Lavene, is a performance that dives head-first into an exploration of definitions of fatherhood and masculinity in the modern age.

Think Ian Dury with a sprinkling of Stephen Sondheim, ‘The Truth about Men’ is both moving and witty, honest and laugh-out-loud funny in its fearlessness.

Author, musician, and actor Scott Levene has performed music around Europe and has been the front man of many bands. Coming close to landing a major label record deal, Lavene’s ‘My Breath Killed the Roses’ was single of the week on Absolute Radio and is often played on BBC 6Music.

One stand-out quote from the show encapsulates Levene’s character’s struggle and quest for self-discovery: “I’m not sure how to be a man, for I was not raised by one.”

The musical begins with an introduction to Mary, characterised as smelling like lavender and honey, who loves making money and cooking. We discover that Mary is pregnant, and thus provides the catalyst for Solomon’s internal conflict.

Solomon, a man who smells like a crumbling library, lives on a rusty boat on an English canal and seemingly only good at drinking and skirting responsibility, is revealed to be the father of Mary’s baby – though he himself is unaware.

The story then unfolds into a series of questions and choose-your-own-adventure-esque paths for Solomon: what will he do when he finds out? What kind of man will Solomon turn out to be? Will he rise to the good man, responsible, stable, and safe or the bad man, deadbeat, shirker, rebel – or put simply – the git.

And so Solomon goes on a musical journey through the canals of England to learn what he can about the truth about men in his quest to try and become one.

‘The Truth About Men’ will be held at the Marine Theatre on Saturday, October 12 at with the bar opening at 7pm for an 8pm start.

LAST Sunday afternoon a capacity audience in St Michael’s Church was treated to a magnificent feast of joyful music, directed by Alex Davies. […]

THE iconic sound of a legend in music and film is brought to life in a brand new production touring theatres across the country. […]